Today's garden happy - those tomatoes are coming thick and fast now.  Thank goodness I really love tomatoes.  One of the not-Sungold plants has blossom end rot though, which is a pain.  They're not close to ripening yet so - well, we will see. 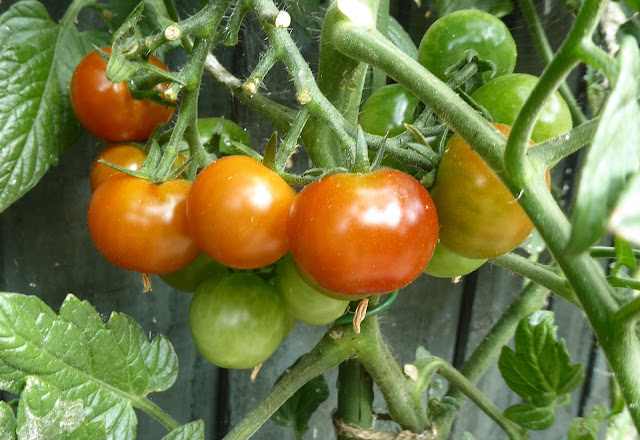 Morning, everyone.  Yet another bright, sunny start to the day with not a glimmer of a hint of rain.  A good, hefty downpour, specifically overnight, would be fabulous but there you go!  South of London has imposed a hosepipe ban and I can't see it being long before Essex does too.  Thank goodness for good, old fashioned watering cans - two of them, one to pour while the other fills.

Yesterday was a funny old day.

As I mentioned, I got on with that blanket project for a fair old time but really hit the wall with one of the patterns - for any who know this design, it was the crochet cable section.  Could I get it right? No!!   After undoing it ten plus times, I fired off a 'help' email to Diana (the pattern creator who I met at the yarn festival) and, within a couple of hours, she had replied, offering to do a little video thing but it couldn't be until next week as she had a commission to finish.  Wasn't that lovely of her.  However, in the meanwhile, I had gritted my teeth, reread the pattern VERY carefully yet again (I hate being beaten by a pattern!) and realised where I was going wrong.  She said the first two rows are, undoubtedly, tricky, but after that it is easy to see the pattern.  And it is.  Phew, that's another new stitch learned.
(she also said thank you for mentioning her in my blog which was nice of her 😃 - one of you will know why she knew!)

When Lindsey came, I went bonkers and had her cut my hair much shorter.  Good for the hotter weather but it needs to settle into its new style and when I woke this morning, it looked like a street urchin's mop.  I hope I won't regret this!

And then I was ready to go to Lindsey's for training.  Bent down awkwardly to pick up mat, towel, water bottle and bag and my hip 'popped' - that's the only way to describe it - as if it had come out and gone back in again.  It didn't hurt but it felt really odd and I turned all woozy and giddy.  So no training - I could walk on it but it didn't feel 'safe'.  She had given me a time for today instead but I've cancelled that and she's sent over a few of her video clips to use, if I would like to.  So nice of her - people,. generally, are so lovely, aren't they?
Now - do I look up 'popping hip' on Google and, probably, scare myself silly, or do I just wait and see what happens (and be sensible and take things easy)?  I suspect the latter is more my way!
Honestly, it feels loads better this morning, it's really just a muscle ache and a slight feeling of 'unsafeness'.

So - funny old day, one way and another.

Today starts off with my coffee and chat with Chris.  She and Steve have to go out later so I'm going over at nine - I know that sounds early but  we are both early birds so it's no big deal.

The rest of the day is my own so it will be the usual stuff.  I have a load of colourds so the washing machine will earn its keep today, as will the outside line.  I have a menu to plan for Saturday (friends over) and a crochet project to work my way through - although I do think the cable section is the very hardest.
Oh, I forgot to say - I've ordered the sunshine and flowers yarn pack so when I have finished the practise blanket (which I will probably either pop into the Sally Army collection point or donate in some other way - every baby deserves a nice, warm blanket, after all) before starting on the one I intend as a gift.  I'll have made all my mistakes on the first one, hopefully!

I seem to have rambled on (again)!  Have a super day, everyone; be happy and safe.  xx