Good morning, one and all.  Thankfully, finally, we had some rain yesterday.  It pretty much started as I came out of Hobbycraft and continues, on and off, most of the day.  Nothing hard, no dramatic storms, but it was rain!  It's dull, misty and cool-ish right now and we're predicted more today.  Bring it on.

I finished the tiny wee socks.  The pattern itself, like all sock patterns, was basically straightforward but, oh, it was so, so fiddly.  As the stitches got fewer and fewer, there weren't enough to keep on the needles reliably they and kept sliding off.  So frustrating.
However, I got there and here's the result, shown with a bit of my mobile for size perspective. 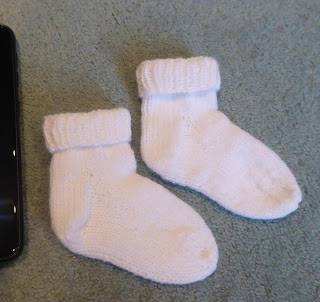 These will definitely be a gift for someone!

I've now started the sock pattern for me with one of the yarns I got at the Summer Festival.  It has a little lacy pattern down one side and it's pretty easy and way, way less fiddly.

Once I've done them, I might start the proper blanket.  I'll see how I feel.

It's nice to have something on the go to exercise both brain and fingers.

Groove yesterday was really good, although it was pretty hot as it felt pretty humid before the rain started.  I then changed at Lindsey's and drove on to Hobbycraft where I had a most enjoyable nosey round.  There's Hallowe'en stuff in and also they have some Christmas fat quarter packs and fabrics which I almost fell for (but didn't - phew).
I actually went to get a couple of sets of double pointed needles and I got them plus a couple of balls of four ply in a very fetching purple which were reduced.  Purple does for boys or girls, doesn't it?  Or it might make adult socks but I don't think it is hard wearing enough for socks and there wasn't any sock yarn there.  I did look; part from anything else, hand knitted socks are lovely and cosy warm in the colder weather and nowadays we look for ways to keep warm that don't involve turning up the heating.

Later on in the day I popped round to Morrisons as there were a few things I needed.  It wasn't a big shop so I stocked up on a few canned items at the same time which made it a bit ouch but the stuff won't be wasted and the way everything is going up, it makes sense.

Today I really MUST do some housework as downstairs is a right mess.  I don't need to go out until after three when it's personal training.  Not a particularly exciting day really but needs must - the housework, I mean, not the PT.
Have you had more rain?  I hope so but also that you have not had any flooding problems.  Take care, stay safe and well and have a great day. xx