Good morning.  We have a good weather forecast for the next several days round here with warm days and chilly nights.  Perhaps yesterday's rain blip is the last for a while now.

As expected, yesterday was very busy, at least the morning was anyway.

I got my M&S/Aldi shopping all done and dusted and then popped along the road to Homebase.  I managed to spend a phenomenal amount on seeds, gardening gloves and seed trays but, sadly, all the Charlotte seed potatoes had gone.  At first I though I'd need to trawl around other garden centres but, after some thought, I went online and ordered some.  Hopefully they will come quickly so we can start chitting them.  Now the shed it tidy, there's room for them to go out there.

After sorting and putting away all the stuff, I set out for the allotment and spent an hour and a half doing this, that and the other.
We have two square slightly raised beds which I weeded and, to my delight, I found that three strawberry plants that I salvaged from the defunct strawberry bed have survived the winter.  As this little bed has the skeleton of a netting cover, We've decided that we will get some more plants and have a little strawberry bed there this year. (On the right and you can see the wee baby plants at the bottom - well, two of them, the third is in between and very small)
Then I set to forking and weeding an area where the runner beans will go.  It was very weedy so it was a case of down on knees to bash up the clods and remove as much weedage as I could.  It took ages but was worth it.  (bottom left).  It doesn't look all that big in the photo but there's room for four rows, two and two, with space in the middle to walk down - probably twenty plants all together.  I will be levelling off the edgep; it looks messy because the soul spread and I didn't have a broom to brush it back properly
Next, I forked over part of what I cleared on Saturday to dig in the manure, smoothing it over a bit more and getting it more ready for the broad beans.  We had planned to get the broad beans started in November but it didn't happen so it's the beginning of March instead.
Finally, I got another load of manure and spread some of it on the runner bean area and the rest around the rhubarb which is starting to come up very nicely (top left, before manure was added.  Another three weeks, maybe . . . 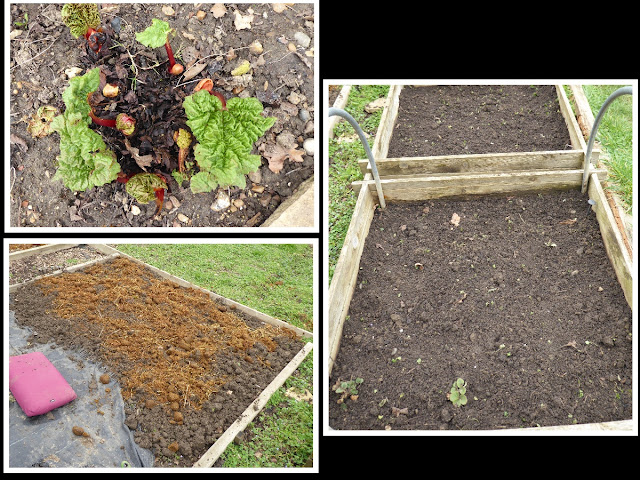 I had intended doing more but it started raining and continued all afternoon which is a nuisance because the grass really does need mowing and I don't want to do it wet as it really messes up the mower.

I spend the afternoon trying very hard not to go to sleep and watched the PM's address to the nation in the evening.  Cautiously optimistic, I would say, fingers crossed people don't go doolally again and take unnecessary risks.
I'm already in touch with my hairdresser!!  :-)

Today I am hoping to go allotmenteering again and get some more weeding done.  They are growing very fast right now and the sooner I start on them, the easier it will be; I can't get there on Wednesday so fingers crossed for today.  Later on in the morning, I will take Beth to the garage to get her car and I have a planned chat with Dad later on in the afternoon.

So a nice day, enough to keep me out of trouble.  I hope you are all safe and well and have nice plans for the day.  xx