Good morning, everyone, and welcome to the weekend.  It's so cold out there and looks lovely and sparkly in the street lamp light.  Beeb seems to think it will stay pretty much around zero all day too, brrrrrrr.

Well, it really was quite a day yesterday!

It started off with Slimming World which was great fun, as always, although numbers were down and the hall was cold!  Personal training at Lindsey's was also really good, although a bit less intense than usual so I didn't cough too much.

Between times, I did some housework sort of stuff.  Checking my mailbox, I had some messages about a delivery but I wasn't expecting anything so assumed it was one of those delivery scams that are going the rounds - until I found a note through the door saying I'd missed a delivery which needed a signature.  This really puzzled me but I went to their site and rescheduled the delivery for next Thursday which is the first day I am going to be able to be in all day.
That still didn't sort out what it was but after a ponder, I fired off a message to the Eyam Brewery.  You may remember that Suzanne and I discovered this lovely little speciality brewery when we were on holiday in Derbyshire in September and I have ordered some beers from them since then, lovely stuff (if you like beer).

Anyway last week, I ordered a 'pick and mix' box of twelve speciality beers to be delivered to my brother, John, partly for Christmas and partly as a housewarming gift as he's recently moved.
There was a bit of a problem with the order (a problem with the site, not my end) and I had some communication with the brewery at the beginning of the week.
To cut a long story short, instead of posting the beers to John, they had been posted to me.  The brewery owner was most apologetic today and said they would be re-fulfilling my order on Monday first thing.  I suggested they contact the delivery company with a view to getting the first box of beers redirected back to them.
We will see.

When I had sorted that out, I went into the kitchen and there was a puddle on the floor.  I thought it was just a splash, mopped it up and came back out.  When I went in again five minutes later, there was a mini flood.  Instant panic!  You can just imagine, can't you.  After a call to the lovely Matt the Plumber and a hasty clearing out of the cupboard under the sink where the water seemed to originate, I found it was the water softener - it was full of water and overflowing.  Eeek.
So I turned it off, pulled out the plug, emptied the water out using a jug and mopped up the cupboard floor.  So no water softener and Matt is coming round during the week to discuss options.  There is a silver lining or two - that cupboard has had a good clear out (much needed), it and the floor have had a good wash and wasn't it good that it started flooding while I was home and able to catch it quickly.   Also, it isn't a plumbing issue as such.  Phew.
I suspect it will mean a new softener - it is pretty old and out of date now and that's what happened when the same thing happened to Dad's; at least mine lasted a lot longer.  Also I didn't know that they need an annual service, like the boiler - it has never had one.  Ooops.  Well, I know now!

I had a phone call from Potters, Five Lakes.  I am nervous with phones because of my hearing but the message they left blue toothed well with my hearing aids (the phone did, I mean) so I gulped, metaphorically stiffened my backbone and phoned back and it was as clear as day.  I must be a bit braver about using my mobile - it is so awkward not being able to use a phone.  Maybe that could be a New Year challenge - to regain confidence when using a phone.
The call was just a reminder that I need to pay the remainder for my break with them at the beginning of February so that's all done now.

Then, to finish off an 'interesting' day. I went to the wreath workshop and had a really lovely time, just what I needed.  It was so nice to see Victoria and Hazel (I taught their sons in Y 1 at different times and Victoria's again in Y4).  It was very late when I got home and very, very cold so the wreath is on the table at the moment.  I'll take a photo when it is up on the door.

Today I have a guest room to get ready for next weekend, some washing (plus drying and ironing!!) to do, some stuff to put back into the cupboard under the sink and a wreath to hang.  This morning, it's the SW walk - yes, it will be cold but I'm looking forward to it, all the same.  This evening should see the Strictly semi final but, because of some football competition or other, it's not until tomorrow - why can't they put the football on BBC2 and leave Strictly where it should be?  As I have zero interest in the World Cup, I will probably dig out a Festive Film to watch. 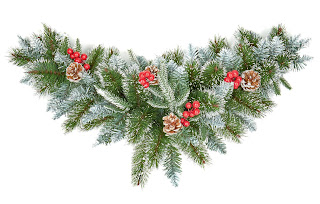 You're probably asleep after reading all that waffle above so here's some Christmas Music to wake you up - the wonderful 'For Unto Us A Child Is Born' from The Messiah by, of course, Handel, sung by the one and only Kings' College Choir.