Afternoon.  Two for the price of one today.

This week, I'm staying in Rest Cottage, right in the heart of Southwold, less than a stone's throw from the main street but in a very quiet lane that doesn't take you anywhere so is hardly used.  The bumph about it - or, rather, the the big house it derives from, 1, Queen Street -  says that it was built in the seventeenth century and has an underlying wattle and daub construction with a Georgian facade built in the late 1700s.  In the 1920s it was an annexe for the Swan Hotel, more or less over the road, and then as a clothing shop in the 1950s and 60s.  It was converted to two properties in recent years and so Rest Cottage came into being.

It is rather charming in an old fashioned 'tatty' sort of way and there's work in progress with some bare plaster and evidence of repair, maybe due to water ingress, but it is very cosy and very comfortable with three big rooms, a downstairs bathroom and an upstairs 'not quite an en-suite'.  All the chests of drawers, etc, are of the old 'distressed' wood type, fairly battered but they go with the whole house.  The soft furnishings are very comfortable and the bed is bliss.  The decor is quirky old antique shop in character and I could quite cheerfully give house room to one or two items (if I were that way inclined - which I'm not!). 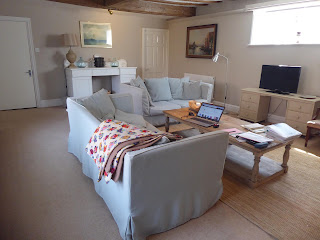 Two photos of the living room, taken from one end and then the other end.  Those doors you can see - one is a cupboard containing ironing board, etc, and the other is locked so I have no idea.  It might take you into 1, Queen St, depending on whether they are owned by the same person and I don't know that. 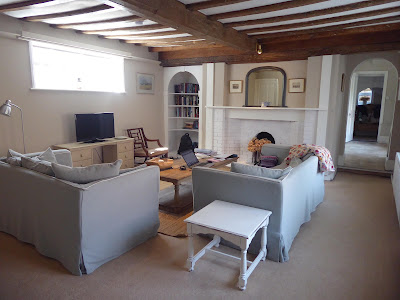 Another thing I don't know is whether the fireplace is a working fire - it might be.
Despite the beams, it's a big old airy space and really nice to sit in. 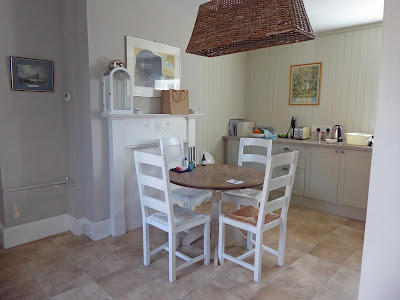 The kitchen from two sides.  Again, it's a nice kitchen with good quality dishwasher, washing machine and fridge-freezer.  It has all the basics but not as well appointed as one might expect.  No small ovenproof dish, for example, no smaller mixing bowl and only two saucepans, but all in all, it's fine. 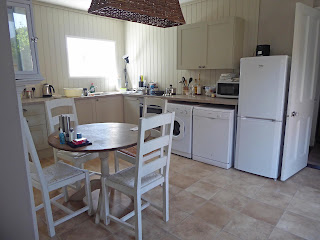 The oven is the typical all-in one thing depending on how you set it.  I've used the fan oven and the grill so far and fine.  My main peeve is that the smoke alarm is a very sensitive little bunny indeed.  I had the grill function on to finish off an omelette and the heat from the was enough to set it off while last night's steak and chips gave it a right temper tantrum.
That's all very well, safety is important, but there seems to be no was to open any of the downstairs windows so you can't cool things down and have to flap a tea towel at it to make it stop! 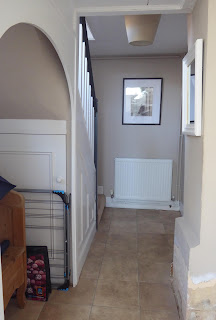 The hall - the stairs go up at the end and near left is just a little alcove with a bench storage thingy.  All it needs is a few coat pegs somewhere. 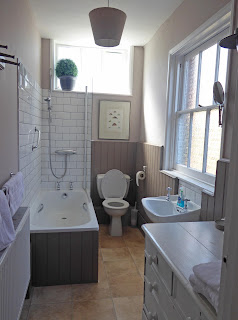 A really nice bathroom with a proper big bath (mine at home is very small so I appreciate a big bath on occasion).  The water is piping hot too - perfect. 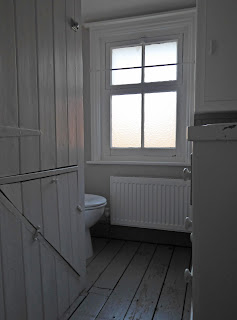 This is the not quite an en-suite,  There are a few more steps up to the right before the bedroom door.  It means I don't have to trudge downstairs in the middle of the night, which is good. 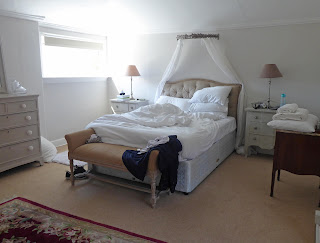 Two views of the absolutely ginormous bedroom.  They could easily make two bedrooms from it but maybe they weren't allowed, it being grade 2 listed.  Anyway, I'm not complaining in the least buit. 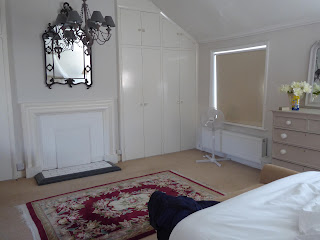 And t'other way.  The bedroom windows do open so that's good.
And there's a fan, a refinement I've not had before in any of my holiday cottages.
There's also a garage, wider than I had expected which is good because Mill Lane is quite narrow.  There's a courtyard to sit out in although it could do with a good weeding.  I'm glad I brought one of my comfy fold up chairs as the garden furniture is of the wooden bench type.
SO that's where I am living this week and I think that, all in all, I've picked a good'un.
And now I'm off to make lunch before my beach walk.  Such a busy life, eh?