Good morning, one and all.  Yesterday was warm and sunny.  Today looks as if it is going in a different direction; it's dull and cloudy right now and, unfortunately, the forecast is for light rain showers.  Not to worry, I have my pac-a-mac (is that what it's called nowadays?) with me so it won't stop me from taking my trip to one of my favourite places, Framlingham.

Yesterday had a very lazy start - I lounged around until around eleven before setting off up and down the high street, popping in and out of quite a lot of the shops which was nice.  A few were closed because it was Sunday but not that many.  There were plenty of people around but not so many that it felt crowded.  I managed to get hold of a plastic measuring jug that will double as a mixing bowl, a cheap milk pan which I will probably leave there and a nice Mason Cash square ovenproof dish with I most certainly won't!

After lunch, I headed off towards the shore (all of five minutes slow walking away, went down to the waves and had an absolutely lovely walk along to the harbour and back again.  Sand walking is really great exercise, isn't it? 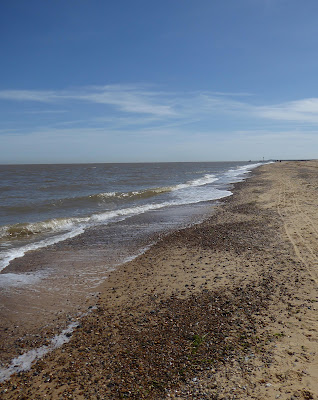 The tide was just on the turn.  Small, gentle, splashy sea horses. 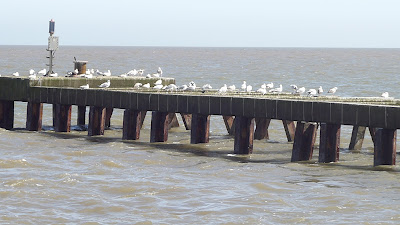 The older part of the harbour wall, unsafe and boarded off now. 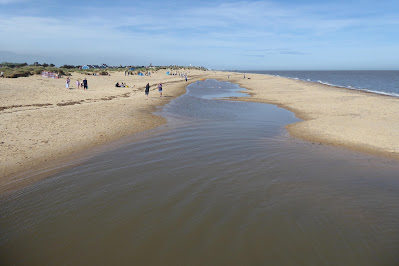 The high tide had created a nice little paddling pool which was being greatly enjoyed by a few families.  Not too deep but deep enough to be lots of fun. 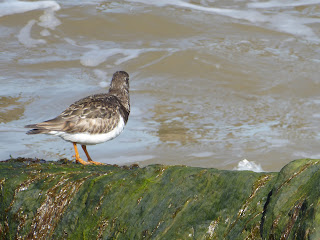 Would he look in my direction?  Of course not! 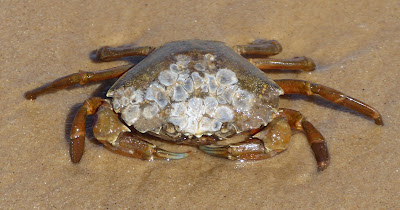 Mr Crab was far more obliging and scuttled up and down for several minutes before retreating into the waves.
I took a few short video clips of the waves but, annoyingly, they don't seem to be in a format Blogger recognises and, being techno-stupid, I have no idea what to do.  Rather annoying really.  Does anyone know what I have to do, please?
Moving on to today, I have my Framlingham ticket booked online  and will be leaving here around nine thirty - ish.  I am looking forward to wandering around the town a bit, hoping the church is open and, of course, doing the castle and walking round the walls (telling  myself 'this is perfectly safe - if it wasn't, it wouldn't be open')  I did it last year so I can do it again!
Once home again, weather permitting, I'm hoping to take another walk along to the pier this time, or maybe up and down the high street to look at the shops that were closed and I'd like to visit a couple of the nice little museums or maybe the church.  One thinks one has plenty of time but it is surprising how quickly that time goes.
Well, I'd better get going.  I have my Facebook responsibilities and I need to have my bath and do a very small food shop (can't be without tomatoes!)
Have a great day and, if you do know anything about videos, please do say.
Stay happy!  xx