Good morning, everyone.  It's a beautifully sunny early morning back home after a wonderfully sunny day yesterday, the best weather of the whole holiday (typical, isn't it - best weather on the last day!).

It may have been the last day, coming-home-again day. but I still managed to get plenty done starting with the packing, of course.  It takes so much less time to pack at the end of a holiday, doesn't it?   With pretty much everything packed and in the car, I set off for a last walk along the waves, then back up to the shops to visit the little Amber museum.

Here's a link that gives some information about the museum, which is very small and packed with amber treasures from around the world.

The info-boards were very interesting and the exhibits fascinating.  Amber is not my favourite form of treasure, nor am I all that fond of Chinese carvings really, but that doesn't matter, the skill and dedication embedded in the creation of such work is absolutely fantastic.

The windmill opened at twelve so, when the time came, I set off back down the A12 and off towards Framlingham.  As Google maps had promised, it was a very easy route and you can't miss the windmill!

I was the only visitor so was threated to an in-depth talk from a member of the family that now owns the mill and who was involved in the most recent restoration work.  It was absolutely fascinating, as was my wander around afterwards.  Going up and down both internal to the lower brick roundhouse and the external steps to the buck was scary for someone who has a fear of heights but I was so chuffed to have done it (chuffed afterwards, I mean - during was a case of  putting on my 'big girl's pants').

Here's an interesting YouTube video of the restoration of the windmill and I am pretty sure the guy in the video is the guy who talked to me about the Mill.

I spent longer there than expected.  It's a small place but there's loads to see.  Here's just a few photos of the outside. 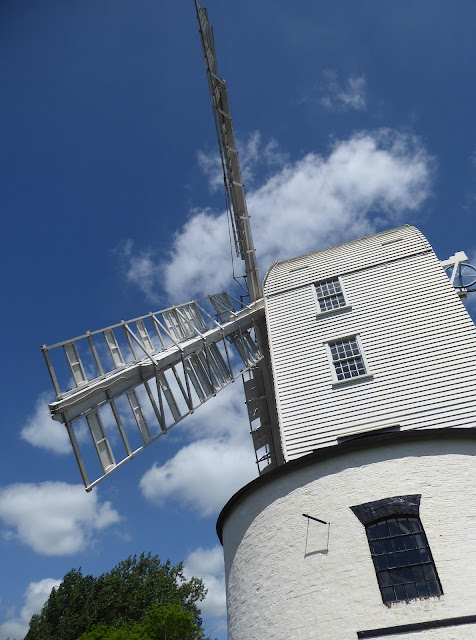 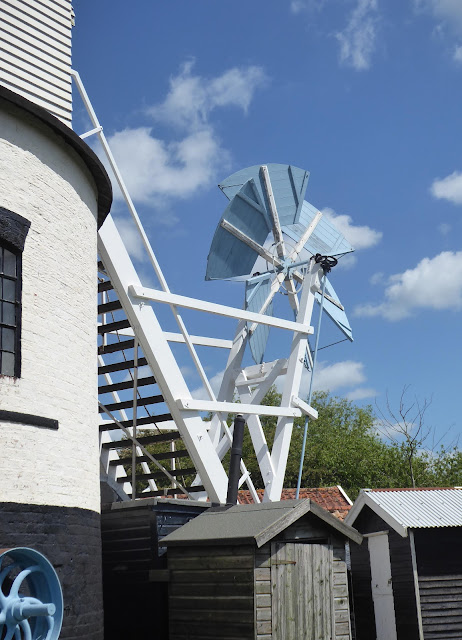 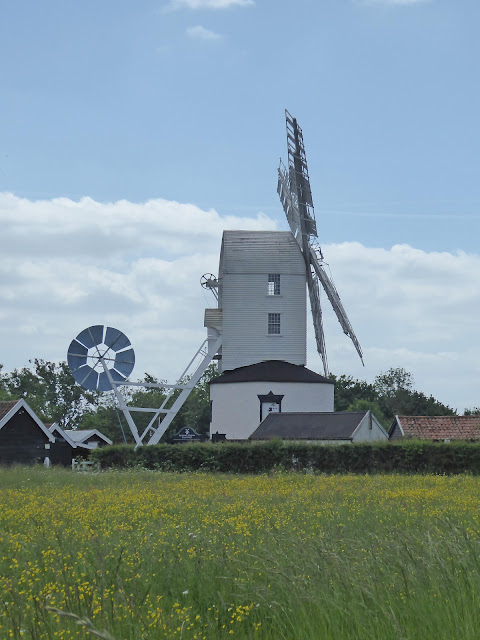 And here's a wee clip of my own of the vanes turning.
The journey home was a doddle - just four main roads plus the last bit - and, while there was quite a stretch of the A12 that had a 40mph restriction, there were no holdups and I was home before four.  Yes, there was some heavy traffic, but that's OK as long as it is moving.
Now I'm home for a few days.  The washing is on, the house is clean and tidy and the strawberries have been picked (not many but they are delicious!).
The weekend is mainly going to be a stay at home weekend.  There's washing, drying and ironing, getting things ready for next week's little jolly and the small matter of dealing with videos.  I've managed to get photos and a video clip off my mobile and the mobile clip is in mp4 format so that should be fine.  I much check and see if I can change the camera format but, very annoyingly, I don't have the Windows Video Editor on my PC.  I'll need to look around and see what I can do.
Then there's always the sitting out and enjoying the sunshine thing.
This evening, I've been invited round to Dave and Anna's for dinner so that will be nice.
So that's today sorted out.  How about you?  What weekend plans do you have?  xx