Good morning!  We've had a bit of sun just now but generally I think it is going to be like yesterday, a bit dull but no rain.  Let's hope no rain anyway.

I had a really lovely day with Val at Sutton Hoo yesterday.  We met up as planned although I was a bit late having taken a wrong turn actually inside the grounds and ending up at the farm instead which was really stupid as there were clear signs.

The Swords of Kingdoms exhibition was splendid but, with so many wanting to see it, there wasn't the time to really pause and ponder before having to move on.  The fine crafting of the gold and jewels was absolutely fantastic; one tends to think of the Saxons as pretty unrefined but these exhibits proved that they may have been warlike (most of the items were sword related) but they were also creative and they loved and valued beauty.

After an early light lunch, Val and I set off on one of the walks, chatting nineteen to the dozen as we did so. 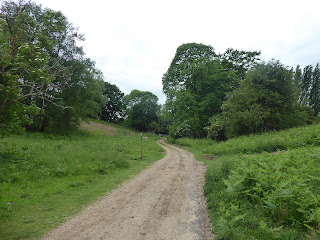 It was dull and cloudy so the photos aren't great but this is the way we went, turning to the right up a quite steep slope through the ferns into a lovely area of woodland where children could have an amazing time with all the fallen and hewn branches. 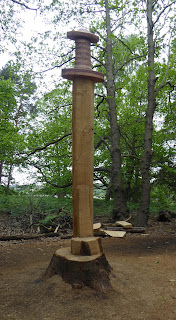 This was impressive - carved from a tree trunk still in the ground and about two to three times as tall as us. 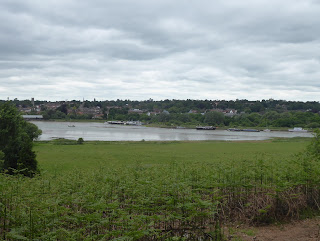 A view over the river to Woodbridge.
We went back down the slope after consulting the map and on until we came out at the new-ish viewing tower that replaces the old low platform that really had done nothing to enable one to see the burial mounds.  This was much better. 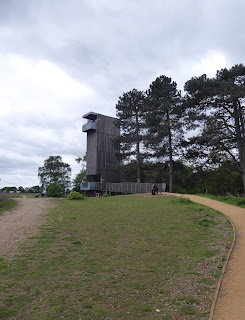 Here it is.  Val decided not to come up with me (knee issues) so I gritted my teeth and climbed up the eighty one steps to the top.  It wasn't so bad as long as I looked straight ahead - if I can do Framlingham walls, I could do this too! 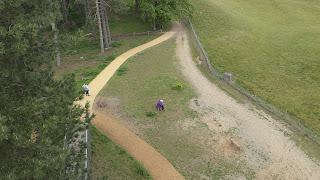 And there's Val, waiting patiently on the ground!
I did take a few videos, of course, and here's the best one (I think it's the best, anyway.  On the actual viewing area ledge, there was a map of the burial mounds with information about each one which was helpful as otherwise it just looks like bumps in a field!


We then headed towards the house and looked around although I found that a bit disappointing.  There used to be costumes on mannequins and lots of 'home' stuff such as china, etc, but that's all gone and the upstairs is now holiday flats while downstairs is more information about the discoveries and excavations - all very interesting but I was sorry the rest had gone.
The chairs were comfy though!
Then it was into the bookshop (Val and I are both suckers for a second hand bookshop) and the NT shop where I bought little gifts for the family before a final cup of tea and home, James, Val going south and me heading back up north again!
It was so nice.  We thought we would have to miss our May meet up but we didn't and I'm so grateful to Val for making the long-ish journey to make it happen.
Today is the penultimate day of my Southwold holiday and I'm staying close to home again.  This morning is more beach walking and wave watching and I'd like to visit the little amber museum while this afternoon I will be at St Edmund's church at two thirty for the free guided tour.
This evening is the compulsory fish and chips from The Little Fish and Chips Shop which is under fifty paces away from Rest Cottage.  It won't go cold getting it home, that's for sure!
I've discovered that my version of Windows has a video editor but, as it doesn't recognise my camera clips, I need to get that sorted.  It would be really nice to stitch all my clips together so I have a project to do while I am learning, don't I?  Not here, though, when I'm back home and using the PC again.
As Eileen suggested, I will also read the camera manual and see if I can understand the video instructions and whether I can upload the clips in some sort of recognisable format.