Hello, everyone.  Welcome to a dark, cool, peaceful early Wednesday morning when only the foolish are up and blogging!  I really struggled to stay awake yesterday evening, had to stop watching 'Inside the Factory' which I was really interested in and go to bed because at that time it's better to sleep in bed than on the chair.  Fortunately, my visitor knows me and didn't mind.

So here I am, early morning, wide awake, just about to have my first coffee (decaf) of the day and not able to see what the weather is doing out there because it is still very dark and the street lights are out!

Yesterday was a good day.  It started with a very leisurely breakfast, moved on to yet another call to the Pru with Beth as my ears relating to the ongoing saga of my teachers AVC (now, I hope, sorted, as the first pension payment was in my account this morning at long, long last!), followed by Sharon arriving to do Beth's and my hair (it feels so, so much better now) and then, after lunch, into town for a little wander round.

I used to love going into town for a wander round.  In fact, the first Monday of every school holiday was set aside for just such a thing, revelling in the freedom to just meander when I would normally be at work.  Maybe the delight I felt was more to do with the freedom than the thing itself, I don't know, but while it is OK to window shop, etc, it doesn't have the thrill it used to have.  I will probably feel very different about it after our new John Lewis opens in September.  Yes, we are going to have a John Lewis!  I will avoid it like the plague until the middle of October as it will be jam packed full and nearer to Christmas it will also be a place to avoid, as will be the whole of town, in fact, but there should be a little window of enjoyment time between the two events.  I like John Lewis!

I made a fish pie for dinner which, although I say it myself, tasted really rather good and I am glad there is enough left over for my main meal today, with top up veg.  There's no denying it, a little splash of cream in a sauce can work wonders!  The garden grown courgettes and runners were also absolutely delicious!

Today I have to get Al to the station after the rush hour and before the milk run - or, rather, when the milk run would be if it were term time.  Then it will be back home to catch up on ironing, change sheets, wash, dry, more iron, sorting out corners of utter clutter and all the other 101 things one does when one's family comes a-calling.

Edited to add something I forgot.  Remember those wooden things in yesterday's entry? 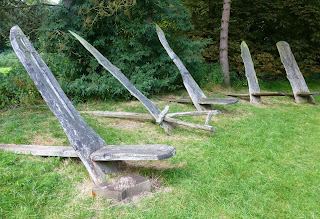 Well, I asked on the Cressing Temple page in Facebook, posting the photo, and it appears that they are African chairs, put there about twenty years ago as a 'feature'.  The question caused a little flutter of interest, Valerie used a Google function to search the photo (must learn how to do that) and she found that they were African chairs.  Then Cressing Temple replied and here's the information.

"Hello all, they are modern structures built around 20 years ago. We have been advised that they were a small addition to the site that were created as a feature."

I suggested:
"Thanks very much, everyone. They look so old! They're very interesting so perhaps there could be some info there about them, maybe?
I'm guessing the sword like crosses are because of where they have been placed."

So there you go.  I am a little more knowledgeable than I was yesterday.  I'd love one for the garden but I guess they are not all that comfortable so I see why they are called a 'feature'!