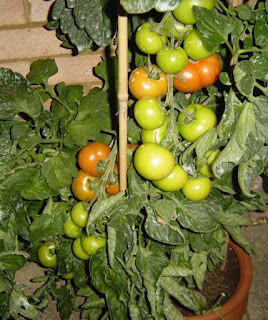 I went into the garden after dark yesterday and took some photos.  This one is of the beef tomato plant.  This morning I went out, picked the large one on the right and ten minutes later it was frying in the bacon fat!  It is ironic that as the days get shorter and colder, my tomatoes decide to start ripening at last.  I have picked loads this week and there's loads more to come.  At present I am keeping up, just, but next week will see me using some for tomato sauce or whatever . . .

It's the weekend, yippee.  Last night I made some lemon curd, one pot to barter for eggs, one pot for DD and DG and the last nearly-a-pot for me!  It's such an easy recipe, made in the microwave and foolproof as long as you follow the instructions!  This morning I set some nice yellow plums in sugar to make 'whole fruit plum jam' which really ought to be called 'half fruit plum jam' as they have to be stoned.  The recipe says stand overnight, so late this afternoon I ought to be able to make the jam.  I'm going to make some flapjacks later on today and, possibly, that plum jam in mulled wine that I've been intending to make for weeks!  I have to get more plums so it's over to Lathcoats to see what they have.  I need to go to the garden centre too, which is just over the road, so it is worth the journey.

I've decided to get some fleece to cover the tomatoes overnight if the forecast indicates an early frost.  They're pretty sheltered against the house wall, but even so I'd rather not risk it.  I want my value for money from these plants!

With the planning done and the resources nearly made, it's all looking good, rain or shine!!