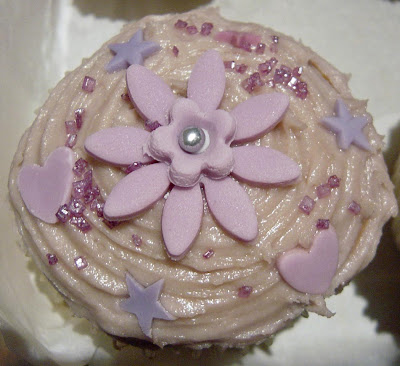 I love mini muffin tins. The one I have was bought at a ridiculously high price at a Pampered Chef party and still looks as good as new, despite quite a lot of use over the years. The tin, combined with mini muffin cases and a bit of mixing and stirring, makes the cutest little cakes, just enough for a couple of mouthfuls (or one, if you like a mouthful). Another good thing is that a one egg mixture makes twenty four of the beauties with enough left over for one or two normal sized cakes, depending on how big the egg was.
I use the 'weigh the egg' method. First you weight the egg (in its shell). Whatever the egg weighs will give to the weight of the butter, sugar and flour. A large egg is around the 70g mark. I bung it all in a bowl with about two thirds of a capful of real vanilla essence, in goes the hand held beater and away we go. It takes about a minute. Finally, just before spooning into the cases, I add about two serving spoons of hot water, give it a final stir and that's it. Into the cases and in the oven for a ridiculously short time (watch them, they do cook very quickly).
The ones I've made today are destined for the freezer, for tea tonight with DD and DG or to be prettily decorated for the meeting tomorrow after school. I've been fiddling with making a sugar paste rose. Not the beautifully delicate, individually moulded petal type, but the kind that involves rolling a sausage, flattening it out, playing with it a bit and then rolling lengthwise into a sort of rose-looking thing. A cheat but a pretty cheat! So the meeting cakes will have a dollop of butter icing with a rose squidged on top. Should look quite nice, I hope.
Photo: One of yesterday's efforts, for birthday gifts and for thank-yous. The wire thing didn't work - the wire is too bendy. I must look around.