Monday and a strawberry first (for me)

Good morning, gentle readers, and welcome to a dull and damp Monday morning.  When I say damp, I mean raining.  Yuck.  A bit of a slap round the face after yesterday's sun and warmth. 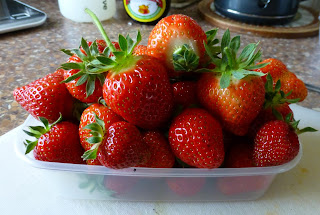 Yesterday was a first for me.  After picking the day's strawberries, I wiped them over, cut out the bad bits and, after combining them with those already in the fridge and discovering that I had half a kilo altogether, decided to make the first ever fruit jam from produce I have grown myself in this garden.  Now I have three lovely pots of jam - one for Beth, one for Alex and one for me.

It isn't quite the first altogether.  In one of the houses in London, we had a very prolific loganberry and although I wasn't really into preserving in my younger days, I did get several pots of loganberry jam.  However, since moving from London over thirty years ago, I have relied on bought or donated fruit so it was a bit of a thrill yesterday when I produced my own pots of my own strawberry jam.

While the berries were macerating in the jam sugar (I use jam sugar because strawberries are low in pectin) I popped over to Beth's instead of her coming to me and met a new yet old family member.    Several years ago, Indigo had a litter that Beth called the Von Trapp litter.  I think it was Alex's idea really.  Because the number and the male/female balance worked out, each was named after one of the Von Trapp children.  One of them, Friedrich (Freddie) had a damaged back leg so wasn't sold.  Instead, he went to a very caring lady and then on to someone else after stuff not relating to Freddie and not anyone's fault.  After various adventures, Freddie has now come back to his first (and last) home and, you know what, he is just as gorgeous as I remember him to be and still has the same endearing habits.

The rest of the day was calm and placid.  I dug out some 'scraps' of Christmas fabric and started replenishing the Kitty Stitches stock of hair scrunchies which, after a slow start on Saturday, sold really well.  I hunted for some crochet patterns for Christmas key rings.  I read and I watched telly

All in all it was a lovely day.

This morning I am in school hearing readers.  This is what I am normally doing on Tuesday but on Tuesday I am wearing my governor's hat and helping with a history experience day with Y1, all about castles.  Should be good!