Good morning, everyone.  I'm home, looking out over my own garden (what I can see of it from here), and feeling thankful.  It's very dull and the forecast is for light rain but it looks to be getting a bit better over the next little while.

Thank you for all your comments yesterday.  They have helped so much through this tricky time.

John and I are joint executors of Dad's will.  My other brother, Dave, lives in the USA.  John has worked closely with Dad to get the estate into perfect order so we are hoping that the necessary paperwork and stuff won't get too complicated.  Added to that, John has an accountant friend who has come onboard to advise and liaise so we're in a good position.

I've been contacting friends and associations Dad was involved in to let them know the news and next Friday I intend running through his online 'address book' so I don't miss anyone out.

Everything just has to run down the pre-determined tracks and we feed into that journey when needed.  There will be times when John and I both have to sign things together but generally he is doing an amazing job, much better than I could ever do.  I think the balance is about right.  I've done most of the 'work' (if it can be called that) of supporting my Mum and Dad while they were alive, as you know, and now John is taking the lead instead.

Yesterday I went to the Church Mum and Dad attended for an hour.  Hazel had opened it up to anyone who wanted; there were some printouts, some candles burning and people spoke as and when they wanted.  I found it incredibly emotional.  Dad had put his heart and soul into that little church and they will miss him terribly.

Then I had a chat with Ann next door before setting off home.  It was a very easy journey, thankfully.  I got home, unpacked, etc, all the stuff one does when coming home, before opening a bit of mail and got a pleasant surprise.
If you remember, last year I finally got round to cashing in a small-ish pension thing, deciding to take the whole lot as cash because the monthly income it was predicted to give was pretty small.  Dave worked out that the tax they charged on the 75% came to a bit higher than it should have but it wasn't enough to protest about and, as we both said, it would even up over time anyway.
Well, it has.  I had a letter from IR telling me I had overpaid tax and would be getting a very useful sum back from them.
Nice.

Later on, Beth and Alex came round and we shared a take-away Chinese.  Beth brought some beautiful flowers with her - so very kind.  We had a good old chat, sharing memories and talking about the last weeks.  We're a pretty close knit family in some ways and my two and Alex had a very close relationship with my parents.

Today, I plan to rest and potter.  The calves continue to improve but resting them from time to time really helps.  I have some washing and ironing, a bit of weeding,. etc, and a cupboard or to to rearrange now I have brought some things here from Mum and Dad's.

I mentioned the best china yesterday; I took a couple of photos to show Beth when asking her if she'd like it and here's one of them.  Lighting isn't great but you get the idea - the is just part of it so you can see it's a very complete collection.  Definitely eight of everything and more of some things. 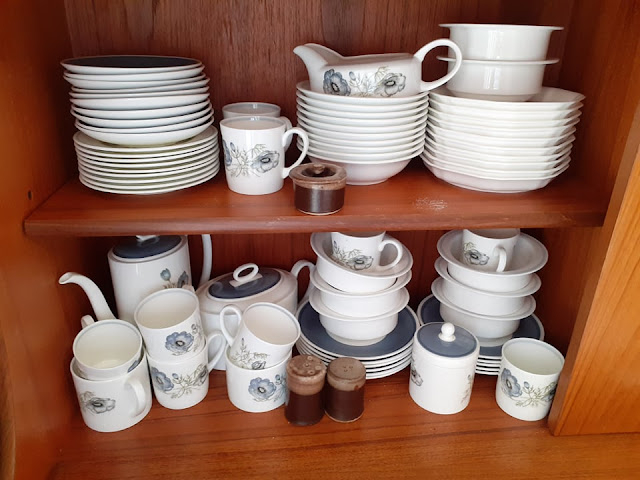 Well, I had better get going.  I'd like to get the old, molto cheapo Matalan glasses into the recycling and the nice, Wine Society glasses stored in their place, move the photos and start up the little cottages arrangement with the smaller ones I brought home.  The bigger ones are still at Dad's and I will bring them home very carefully.  I'll take a photo once I have them all as I want them.

Have a great day and I hope your weather is better than it looks like being here.  Take care and stay safe.  xx