Good morning, everyone.  The sun is shining brightly at the moment (nearly 06:00) and the sky is a clear and brilliant blue.  It's a perfect early morning and I may very well finish this, get dressed quickly and take a stroll down to the sea front.
Yesterday stayed dull and gloomy pretty much all day apart from occasional glimpses of sun but no rain.  OK, the occasional hint of light drizzle, but that was all.

I started the day off with a beach walk taking loads of photos of the sea, none of which were particularly successful but not to worry, and stopping off at the butcher's shop, the delightfully named Mills and Sons and Daughters - obviously a real family concern. 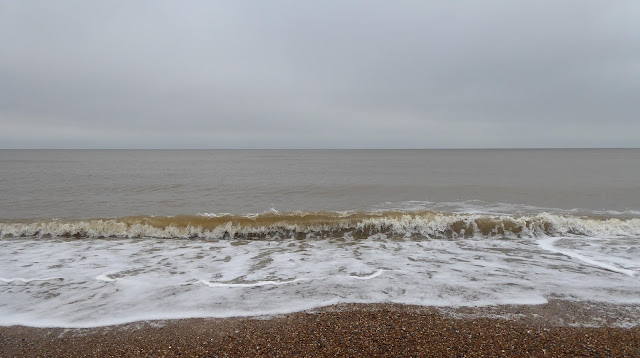 After a leisurely breakfast (lovely bacon, I'm going to stock up before I go home) I set off for Orford and the castle.  To get to most places, it seems you got on to the A12, north or south, and then take the relevant turning off again.   It was very easy.

Orford is a pleasant village with the castle, an interesting looking church and, of course, Orford Ness.  It also has bags of history!
The castle was started as a 'don't you dare' to the powerful Bigod family after some tension between throne and powerful barons.  The Bigods were based in Framlingham (going there tomorrow) so there was definitely a power thing going on.

It's not nearly as big as Framlingham castle and is built on a circular interior with three turrets that create an exterior triangular feeling (if that makes sense).  It's very commanding, exudes power and might, quite bleak and  and must have dominated the whole area, set as it is on a hill. 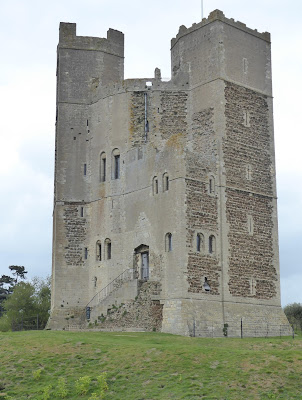 In these Covid times, one is not allowed to just wander.  We had a guided tour, most of which was lost on me because the tour guide wore not one but two masks so it was just too muffled for an old deffie.  Not to worry, I took photos and had read Wiki on the subject. 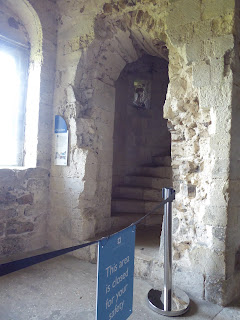 There were lots of intriguing passage ways leading off from the central circle but nearly all of them were cordoned off, frustratingly.  They mostly led to rooms - living areas, tiny little things.  They certainly didn't believe in personal space in those days! 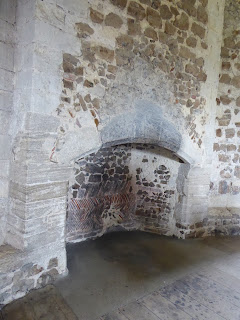 There were fireplaces on every floor - great big things but I bet they didn't keep the place all that warm, not with open windows!  East Anglia can be very bitter. 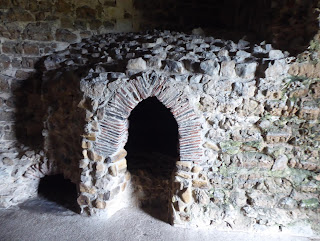 This was one of the little rooms we were allowed into - the bread oven.  It's not a great photo (it was very dark) and the bumph said it was made from broken tiles that were no use anywhere else.  To reduce the risk of fire, it was near the top of the castle.
I will go back sometime, after the restrictions are all lifted, to take another, more complete look - not being able to explore the little nooks, crannies and corridors was frustrating! 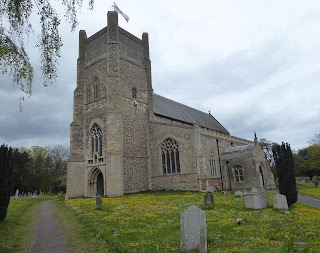 Near to the castle was St Bartholomew's Church but, sadly, it was all locked up.  Another thing on the 'next time' list, maybe.
Apparently, it was the venue for the first performance of four of Benjamin Britten's works. 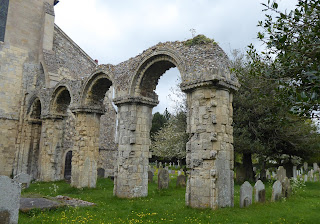 This part was begun in around 1166 and abandoned in the 18th century.  I wondered if the graves within the shell were crusaders - they had swords as crossed on the flat stones. 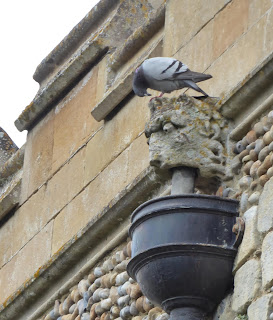 I just had to take this - a pigeon talking to a gargoyle!

On the way back I stopped off at Snape Maltings where, unlike the last time I went, there were plenty of parking spaces.  I love this huge wooden tables, presumably used for outside events. 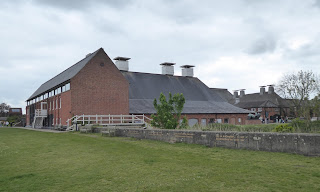 As well as the famous concert hall and the water way with boats, etc, there were some arty-craftly shops which were most enjoyable to investigate.  Don't think I wasn't tempted, I really was, but I was very good and just came away with a tin of rather nice (I hope) drinking chocolate for my dad. 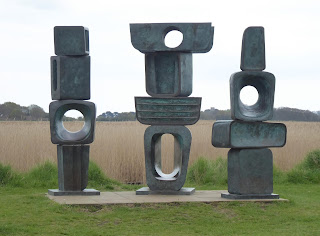 A sculpture, an unfinished Barbara Hepworth called The Family of Man.  It was strangely powerful.  There were also other scriptures including a Henry Moore called Reclining Figure.
It was lovely, wandering around the outside.  Those huge, enormous East Anglian skies . . .
Today, I have nothing official planned this morning but I want to visit certain shops and spend some of my carefully stored dosh.  Peering in the window of Seasalt, I saw some lovely prints, so I will definitely take a look, and there are also a number of charity shops that might be worth investigating.
This afternoon, I have the booked tour of the Adnams distillary followed by a gin tasting session.  Woo hoo!!
And in other news, I have a definitely confirmed second student who want to come back.  As I've said, I'm no longer looking for students but any who want to finish off with me are more than welcome.
Well, better stop this and get going if I want that early walk.  Have a good day.  xx