Good morning and a pinch and a punch for the first of the month.  July already and at last it feels like good old summer.
Yesterday started off pretty cool (in comparison) but soon brightened up and today is supposed to be quite nice with that lovely breeze and 'sunny intervals'.  I'm not sleeping so have come down at stupid o'clock so there's no point checking out of the window yet!

The journey home yesterday was much better than going.  For a start, being Sunday, there were very few large lorries on the M25 and the only real hold up was, as always, the Thames crossing.  The left hand tunnel had an 'incident' (not 'accident') so maybe it was worse that usual for that time on a Sunday but, as those of us on the right moved into the tunnel, the traffic to the left started moving well again so it must have been cleared.

Once home, I sorted out my stuff.  Suzanne had given me some veg as she's off to Bangkok or somewhere equally exotic today - in fact, she has had a start on me as her car was coming at just before five - and some of the stuff wouldn't last until she got home.  I also acquired a bunch of flowers for the same reason which, once the fading flowers had been removed, looks very pretty. 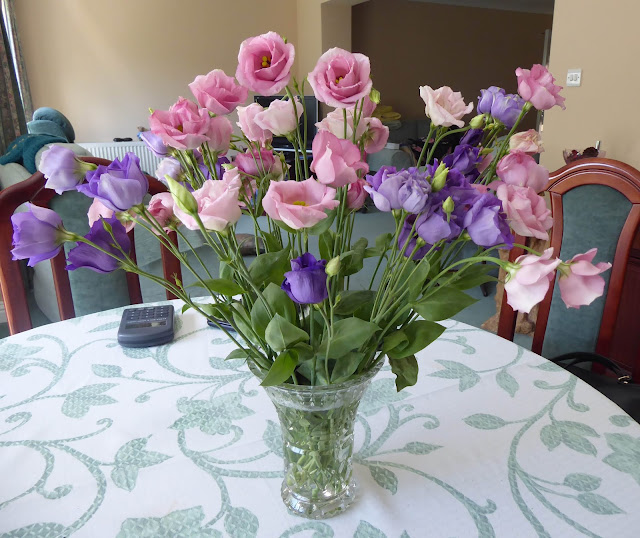 After sorting out my stuff, which really didn't take too long, I went out into the garden which seems to have been thoroughly watered and everything looks very healthy. 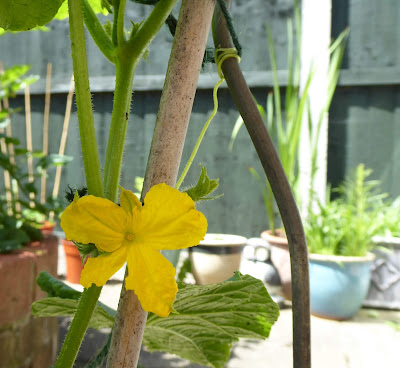 I now have cucumber flowers so, maybe, by the end of the week, I might have tiny cucumbers too.
This is just one but there are others.  I read up about this kind of cucumber and it said that they are nicest picked young, more the size of a courgette than a fully grown cucumber and, judging by the way they are coming on, I won't be short of fruit (and nor will my family and neighbours!). 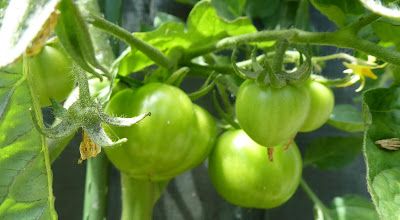 The tomatoes continue to do well.  However, the label on this plant said it was sungold, but it ain't - not with tomatoes that size, far larger than any sungold I have seen.  It'll be interesting to see how they turn out. 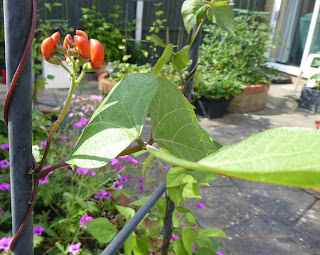 
Suzanne said that my jeans will likely be rather too hot for where we're going and she looked through her cut offs to see if there were any I could borrow.  Whether I did or not is by the way (I have done) but imagine - me and the slender Suzanne exchanging clothes.  Wow!!!

Today is a bit busy.
I need to go to Computer World with Beth and then I have some tuition planning to do before starting to plan for Southwold.  There's only four days now before I go.  Woo hoo!!!
In the afternoon, I am helping in Foundation Stage before tuition.  It's all go but it should keep me well out of trouble, don't you think?  I guess I will sleep better tonight.