Good morning, everyone.  The sun is shining and the forecast for today is very promising so fingers crossed for a good day, like yesterday.

I now have a new electricity meter after the chap came, as expected, to instal it.  So that's off my list.
The letter came about the boob squash.  All's fine, next one in three years after which time I will have to organise my own - as if breast cancer stops at the age of 71!!!
Beth came round to work here.  She said Indigo hasn't ventured out since her little adventure!
I sorted out the messy pile of magazines, recycling most of them and replacing them with the most recent mags that I bought to take on holiday and hardly read.
I did the tuition session.
The biggest excitement was probably spraying the blackfly on the new dahlia at the front.  I've just been out to take the photo below and it seems clear now so that's good as it's definitely one I want to keep.  I'm not sure if the multi-colour will continue or if it's just an accident of nature and it will revert - I hope it's the former!  There are plenty of buds so I will find out soon. 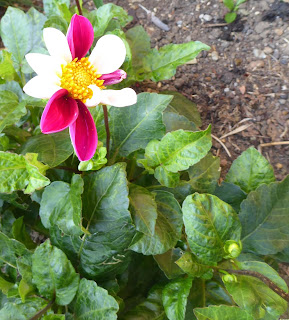 Apart from that, I can't really remember anything much - it must have just been one of those 'nothing' days.  I suspect today will be the same.

I need to go to Aldi as I suddenly find myself out of things like loo rolls, frozen salmon, etc.  The result of running down your supplies before going away is that you have to run them back up again afterwards!  I need to make some more yogurt and have no long life milk and I am getting through salad veg like there's no tommorrow.

I'm also thinking of replacing the lino in the downstairs loo.  The flip side is that there's nothing wrong with it so doesn't actually NEED replacing but it was a hand on off cut from Mum and Dad, it's dark and makes an already small-windowed and gloomy room a bit gloomier.  I think a nice, light replacement would make such a difference.  There's a couple of flooring places near to Aldi's so I will take a look and see what's there.  I'll have to get them to lay it too but that's OK.  It's a tiny room with some awkward bits so better for the pros to do the job.

The garden is looking so exciting right now - apart from the runner beans which have plenty of flowers but none are setting yet, they just drop.  It shouldn't be long though and then I will be swamping the neighbours with offerings!

The ready cucumber does need cutting as you can see below but I will leave it until Friday so it's fresh to take to Dad's with me.  There are loads more baby ones so I hope the neighbours like cucumbers as much as runner beans. 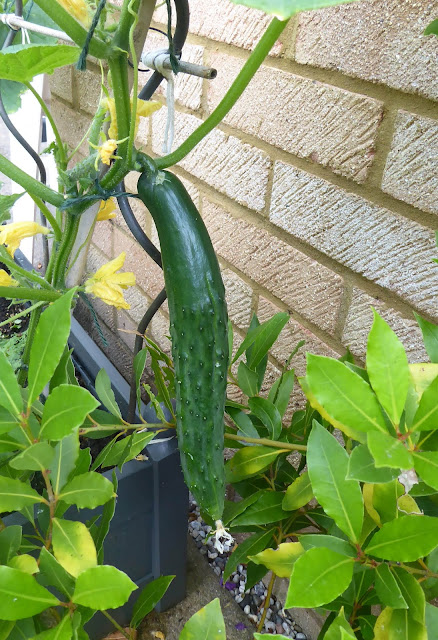 Still no sign of ripening tomatoes but it can't be long now, surely.  They are definitely lightening up.  Dad has already picked a few so he's won that particular race - yet again!  Grrrrr . . . 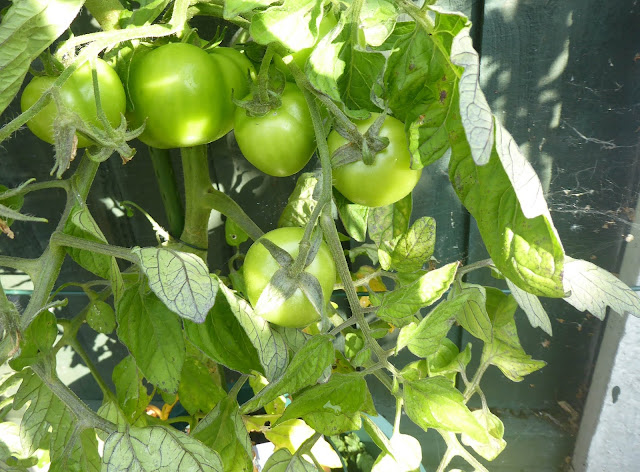 Well, it's nearly seven, more than time I started the day off with a tidy and clean around the kitchen so, as Diane sometimes says, I will love you and loave you!  Have a splendid day and I hope everything goes well for you!  xx