Good morning, everyone!  Thank you so much for the lovely comments yesterday.  You have always been so encouraging and positive;  I can't say how much that has helped me through the trickier times and kept me cheerful in the easier times.  Thanks so much to you all.

Wasn't yesterday lovely?  Warm but not humid, bright, sunny and cheerful.  I had breakfast in the garden in a pretty leisurely manner before starting the day's work.  At the moment the place looks as if it's been hit by a bomb with things to pack scattered everywhere.  Kitchen, living room and guest room have all been hit but by eleven or so, calm will have been restored apart from the food that should stay in the fridge until I actually travel - quite important for my house sitter!

On Tuesday or Wednesday, I blogged about my two baby cucumbers.  This morning I counted six definites and two possibles.  It's hard to tell at first - the female flowers become cucumbers while the male flowers do the necessary, wither and drop off, poor things!  Barring disaster, I'm not going to go short of cucumbers this summer.  Cucumbers and tomatoes!
I wonder if one will be ready for when I get home.

I had my last tuition session with my oldest student - I mean the one I've had for longest!  Next week I won't be here and the last week of term is the Leavers' Bbq and Disco so he will be going to that, of course.  He brought with him a lovely bunch of flowers (which I will take to Southwold with me) and a photo frame with the words 'To Mrs Clark, thank you for believing in me.  Love, S, xxxxx'.  I have to admit, I got a bit watery eyed at that point.  I will miss him!

It was the last pottery session of this term last night (for me - the last session is next week).  I went to the office there last night to book next term and, darn it, the Tuesday morning session was chokka full (and was so by Monday afternoon - they course only went online Monday morning) so I've booked Thursday evening again instead.  Now I've got to know the Thursday people, I'm happy about that.  There's some very gifted potters in the group and people are very good at sharing advice, info and tools.  It's quieter and there's more help available and more space to work as there are fewer of us.  Beth's coming along too to give it a whirl.  I will be totally eclipsed by her as she has all the creativity in the family but I don't mind that; she'll give me good ideas!

The two finished pots were ready to weigh, pay and take.  I'm quite happy with them and the bird bath one will look great once I get it hanging outside; I know it looks a bit uneven and 'rustic' but that was the intent!  The 'leaf' one isn't what I had in my mind's eye but not to worry, it's a bit different and I will use it for something.  Most importantly, I learnt a lot while making it. 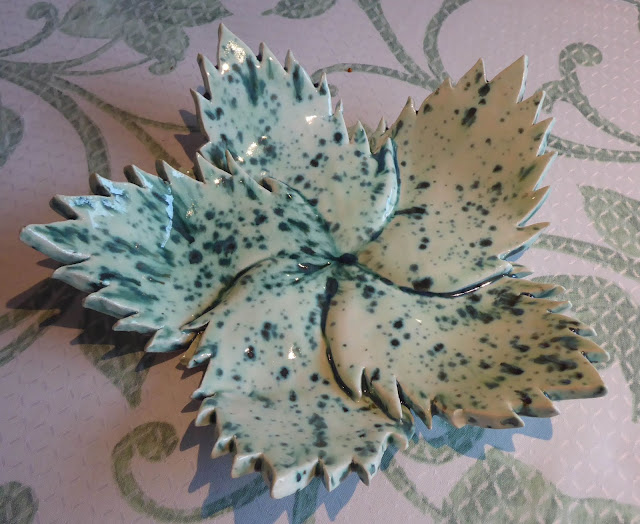 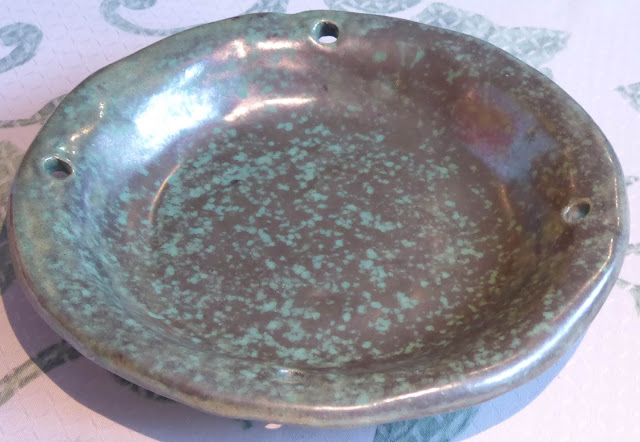 I was half way through making a pasta/tapas bowl and last week had wrapped it carefully in damp J cloths, cling film and hope.  It worked, it hadn't dried out at all, so that's something else learnt.  I spent some time trying to get the inside smooth (and failing, mostly, but it's the best I could manage) before using one of my tools to draw a 'tree bark' sort of texture around the outside.  I think it will look quite good when it's finished.  It has to dry out now so it will just have to wait until the end of September before the next stage.

As I had an hour left and had the foam pad I bought from the market, I had a go at that technique I linked to last week.  The idea was just to practise rolling and smoothing, getting a torn edge and then maybe using a jar to see if it worked on round things but Alex, after listening with interest, produced a few off-cut blocks so I went for it and, you know what?  It worked!
Tearing the edge wasn't quite so successful - I will need to work on that!
I recycled the first effort but carried on with the second attempt which is now also drying.  It will make an olive dish or something similar as it's small and shallow.
I need to get a much deeper foam pad to make a deeper bowl but, dear me, that won't break the bank.  I also need to get some off cuts and need to look around as I have no idea where I would get something like that.

On to today and although it looks as if I have loads to do, I don't really.  I have my lists and it's just a case of getting it all into case, boxes and bags and into the car.  I know my route and have done the drive most of the way.  It's dead easy!  I can't get there until around four anyway.  Next time (if there is a next time) I will know where I can park and will be able to get there earlier but I don't want to be faffing around hunting for parking today.

Apart from that, I just need to leave everything tidy and ready for my friend who is having a week at mine, bless her.  I have one duvet cover to iron and the fridge to sort out as I didn't get that done yesterday.  Lastly, I will give the garden a good soaking.

So no panic and maybe, tomorrow, hopefully, I will have photos of the seaside for you!
Have a great day.  xx