Good morning, everyone.  It's fairly fresh outside this morning, there's a 'funny' light to the sky so I reckon rain is coming and, indeed, BBC weather predicts 'heavy rain and a gentle breeze' for much of the day.  There's a yellow weather warning for rain too.  Oh, well, good for the garden and it will keep everything cool.

I'd love to say I had a great night's sleep in a cooler bedroom but, in fact, I tossed and turned for a long time before getting to sleep.  There were occasional flashes of lightning so I guess the atmosphere was somewhat 'charged' and maybe that's why.  Also, it's taking a lot longer to cool off inside the house than outside.  Great news for the colder months, not so wonderful in a heatwave.

Yesterday saw me more or less back to normal after taking Al to the train at midday.  I had changed the bottom sheet and pillow cases on my bed after three sweaty nights and there were Al's sheets as well so I got them all done and dried and will do the ironing thereof this morning.  Apart from that I took it easy and caught up with some missed telly.  I'm particularly enjoying the Nadiya cooking series.  Her recipes are a bit calorie laden but very sensible and adaptable and I've sent for the book that goes with the programme.

Today I have already done my tour of the estate and came back in with another cucumber.  That's the fourth so far and there's another that will need to be picked on Monday, I reckon, another the next day and several clamouring at their heels.  Well, that sorts out my offering for the Slimmer of the Week basket next Thursday, doesn't it?

I looked up my chilli online as the label had given no indication of heat and discovered that it is a pretty hot one.  A little will go a long way!  They're not ripening yet but they go all shades of red, yellow and orange, it said, the redder the sweeter - but there are loads of them popping out all over the plant and it is, indeed, a very prolific variety.  They dry well too (says the article, I read), and they freeze fine.  It's just as well I am finding that I can tolerate hotter foods now as these little beauties pack a punch!  Next year, however, I might also look for a milder one (I'm hoping I can overwinter this one indoors) to grow alongside the hotter one.
It's a bit like a 'Count the Chilli' competition at the moment! 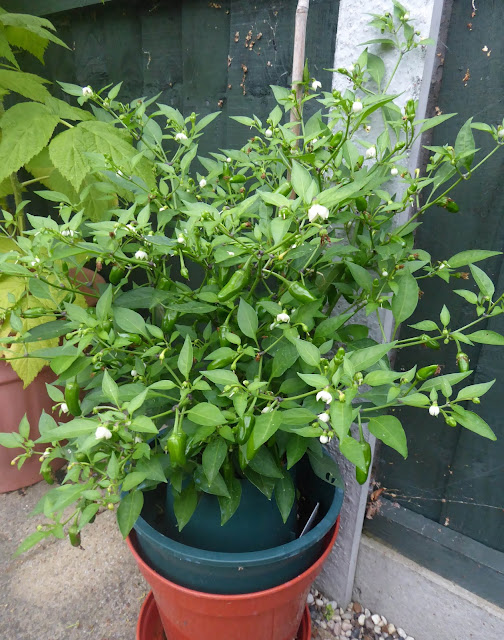 I wish the pepper plant would catch on.  There's plenty of flowers now but precious little to be seen in the way of fruit.  Perhaps I should have had two plants.

The blueberries have some fruit but not an awful lot.  However, there's strong growth coming up for next year so I must do a good pruning at the right time  (during the winter months).  As the BBC says:
"Prune them between November and March when the plant is dormant. When pruning, take out any dead, dying and diseased wood. Locate the oldest canes and remove one or two at the base each year. Remove the old canes that don't produce much fruit to make way for younger, more productive canes."
The few fruits I will get will be very sweet and delicious though.  Last year's were lovely. 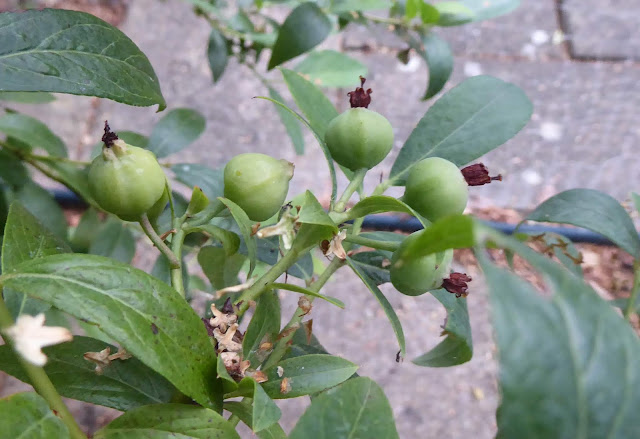 The autumn fruiting raspberries are now starting to flower.  Can't wait!  There's different plants so some berries will be red and some yellow.  Very ornamental as well as tasty! 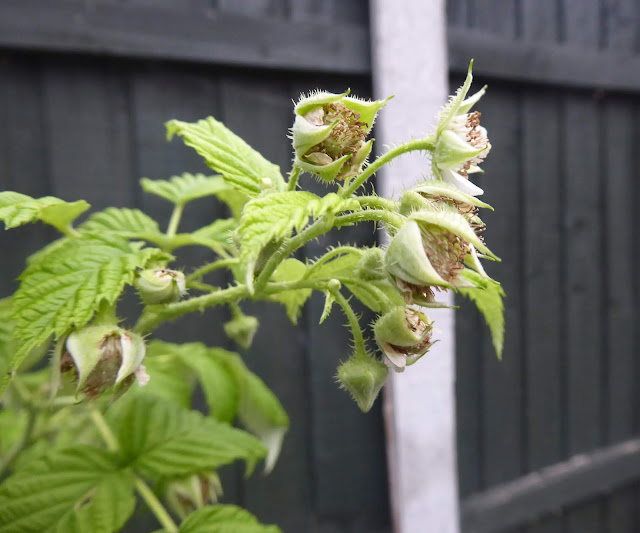 Well, as I have been typing this it has turned blacker and blacker outside with a stiffening wind; something is on the way and rain really can't be far behind.   It will be lovely and cool and fresh and the garden will get a good soaking so absolutely no complaints from me whatsoever.

Time for another coffee and then I will have my bath and get ready for the day.  I hope it is a good one for us all.  xx
Posted by Joy at 06:39