Having let the various meds have their effect, I had another go at tasting the slow cooker loaf and, you know what, it's not that bad.  Here's my thoughts.

It has quite an open crumb with quite a lot of holes.   My dad called the holes 'butter thieves' when we were little! 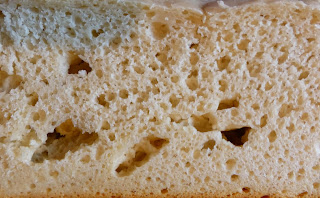 It didn't 'gloop' when I put it in my mouth so was properly cooked.

Despite the difference in crust between the bottom and the top, it didn't spoil the bread for me.  Next time, I won't bother to brown the top in the oven.  I might try the grill but probably not.

It didn't dome at the top as it rose..  I can see the use for such a regularly shaped slice, even if it just easier to cut off the crusts!.

So - not totally won over but it's certainly not wasted bread and I intend to have another go.  I suspect the cooking time varies from cooker to cooker.  Mine is very old so might take longer - it was baking the bread for two and a half hours.

If anyone (Diane?) has a go, please do let me know how it goes for you.