Sunday - last day of the half term break

Good morning again and apologies for this being a little bit late.  Amazingly (for me, that is) I slept in until nearly seven and since then I've been doing little kitchen tasks such as emptying the dishwasher, moving things around, sorting out my electrical cupboard (what a load of stuff I had in there, to be sure) and generally making space for the new kitchen baby.  Now, hopefully, Beth will take the processor and all the associated bits and bobs.
Note to self: dig out the paperwork.

Yesterday's soup was very delicious, full of flavour and with a good texture too.  I do love my Saturday soups.  I have frozen three generous portions too so, what with that and the leek and potato soup, that's school lunches sorted for next week.  Great!

After the soup, I went on to make some savoury mince and some savoury crumble topping, both for Al and me today.  I got a bean and vegetable pie out of the freezer for Beth so that is Sunday dinner sorted apart from heating up some sweet corn.  I might put the mince and crumble topping recipes on Teacher's Recipes - there's nothing unusual about them but they are tasty and easy.  It's a shame I'm just so bad about measuring amounts for things like this.  The method is to bung it in and if it doesn't look or feel right, bung in some more.

The rest of the day was spent in knitting and crochet and I have nearly finished another row of the bed cover.  As always with a made up pattern, one thinks of improvements as one goes along and I am no exception.  If I ever do it again I will plan out the colours a lot more carefully.  When I look at pictured on the Internet, I see that although the colours look quite random, they really aren't.  You live and learn!
I'm starting to run out of some colours so another order to Deramore's seems to be on the cards.

It snowed very prettily yesterday morning.  Lovely big flakes drifting gently down.  At one point it seemed to be settling but it didn't, sadly.  Never mind, it was a lovely sight, especially from the this side of the glass where it is cosy and warm. 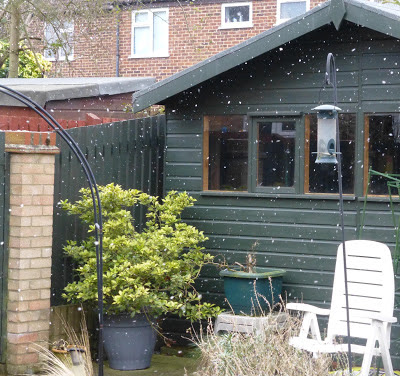