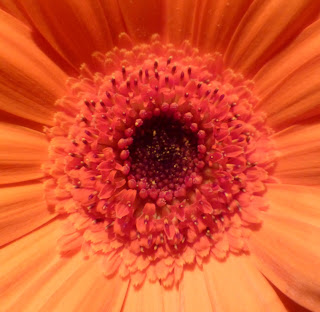 For the very first time for as long as I can remember, I slept in until after seven - that's like almost midday!!  Hardly surprising though, when I say it was well past midnight when I went to bed.

Yesterday evening I was out for a meal at the Hare with Julie and Linda.  We had a jolly good natter with plenty of fond reminiscing.  Our friendship goes back a very long way so there was plenty to cover while we troughed our way through the meal and lingered over the coffee.  By the time I got home it was nearly nine, I think, and my head was a-buzzing (no, not with alcohol, we didn't indulge) and I stayed up until I could feel the sleep coming over me.  That made it past midnight.  Hence the very late awakening this morning.

As always, we had a jolly good meal at the Hare.  They've increased the number of 'smaller plate' options from four to eight.  Great!!!  So I had their chicken and mushroom puff pastry pie with peas and chips and it was scrummy.  That, a dessert of two scoops of ice cream, two diet cokes and a large filter coffee came to just over £16, which I thought was jolly good value.  I couldn't have eaten much more, even if it had been presented, free, on a golden platter!

We set the next date and I  have undertaken to organise it.  We will go for a 'Christmas Party' meal with a special menu and for prebooking only.  Julie has sent me her choice already and I am just waiting for Linda's before I pootle down there and make the booking.  I'm having pate for a started followed by their winter vegetable and butter bean cobbler, which sounds absolutely delicious.  A whole selection of vegetables in a tomato sauce, topped with a cheese and herb scone.  Doesn't that sound wonderful?  It's accompanied by more vegetables - 'seasonal', which means sprouts, I guess - and roast potatoes.  Or I might change my mind and have the cranberry and mozzarella beef burger instead.  Decisions, decisions!  Dessert will be their ice creams, which are scrummy.
We're going to do a Secret Santa too, so it should all be very enjoyable!

Isn't it odd how, after a big meal the night before, one wakes feeling very hungry.  You'd think it would be the other way round, but it isn't, not for me.  I'm starving!  Mind you, I am used to breakfast at about six and it is now past eight . . .

Better go and feed myself then!
Posted by Joy at 08:24