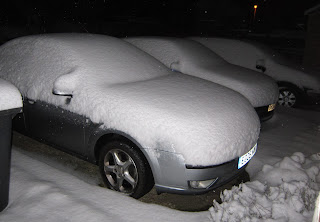 At last it came.  It took its time.  All day it was intermittently sunny and cloudy and each time I thought 'here we go', but no, out came the sun again  Rather a shame in a way because I love watching the snow fall.  It has the same effect on me as watching waves or a waterfall or the wind in the trees - soothing, relaxing and hypnotic.  At about nine-thirty I looked out and the snow had just started.  Very fine, powdery flakes which were starting to settle on car and path.  And I think it must have kept going all night, which is most unusual for round here.  It's still falling, but not heavily and everywhere looks strangely bright, as if each snowflake had its own tiny inner gleam of power.  If it's like that here, it must be very impressive elsewhere.

Yesterday was a busy 'in the kitchen' day, the first real test of my determination to keep everything neat and tidy and to go to bed with a shiny sink and a loaded dishwasher.  Early in the morning I popped out to Morrison's for a few things and ended up getting more than I intended - isn't it always the way?  I had a list too.  There was meat, prepacked, of course, for three for £10, so I bought two packs of casserole steak (can't remember what kind) and a pack of 25 meatballs.  Yes, I know, they are easily made, but they seemed very good value and saved time - and I didn't like the look of the mince that was part of the 3 for £10 offer.  I decided to do beef in beer, which I haven't made for ages, and make a sauce for the meatballs before freezing them in single portions.  A good tomato sauce isn't rushed, nor is beef in beer, so these were simmering on the hob for quite some time before cooling.  I have to say, the house did smell good.  I did something silly though.  I needed to make another loaf so loaded up the pan and set the breadmaker off.  It wasn't until the whole process was well under way that I realised I'd put on a wholemeal/granary load but used a white loaf setting, which is an hour faster.  As it was a bit late to do anything about it, I let it finish.  It actually wasn't too bad, a bit smaller than usual and likely to be more solid, but it will be perfectly edible, I am sure.
The ham and lentil soup was really scrummy and there's a portion left over for tomorrow's lunch.  Excellent!

In the OUSA Food and Drink forum a while back I was moaning about how naff I was with shortcrust pastry and someone told me about Proberts pastry, an alternative way to make it.  You have equal amounts of butter, white fat and boiling water (e.g. 4 oz, 4 oz and 4 fl oz) and the same weight of self raising flour (12 oz).  You put the fats in a bowl and add the boiling water, mashing it all down with a fork.  Then you add the flour, mix it in, cover and chill for at least two hours.  After then, you roll it out as usual.  I wasn't sure but thought I'd give it a go and, you know, it really wasn't so bad.  An awful lot better than my usual efforts anyway.  I made a mixed fruit pie with an assortment of fruit from the freezer as well as the leftovers from a fruit salad which we can have for dessert today (assuming DD and DG get here) with custard and then for dessert during the week too.  There's some left over so I might make some cheesy straws or some jam tarts or some apple turnovers or I might freeze it for another time.  Decisions, decisions!


Well, it's still snowing.  I need to do some kitchen stuff and make breakfast and then find my boots so that I can take the things I made yesterday to the freezer in the shed.  It's on days like this that I regret not having a freezer indoors!
Stay warm and stay safe everyone.