Good morning, everyone.  It is lovely outside.  Clear skies, sunshine, hardly any breeze - just perfect.  I've already got a load of washing out that did overnight and there's another lot in the machine as I type.  May as well make the most of it.

Yesterday turned out quite busy in the end.  I headed off for tuition at half past eight and had a great hour with my student.  Then, after breakfast, I decided I really fancied a bit of retail therapy, something I haven't done for quite a while.  There were a lot of little things I wanted to look for so I set off for the Riverside retail park and wandered first around HomeSense, then Matalan and finally Home Bargains.  I got a whole load of bits and bobs in HomeSense, including a new bath mat, a little stand for holding cookery books, some posh pasta and some nice coffee.  Oh, and a candle called 'apple pie' which smells absolutely wonderful!

Matalan surprised me - there were a lot of empty or nearly empty areas but I gathered they were in the middle of getting out the old stock and putting out the new season's clothes.  Even so, I've never seen it like that before. I managed to get some reductions, especially a couple of pairs of light weight pyjamas and some slippers.  I'm finding that the nights are a bit cold for just a nightie but it's not cold enough for my warmer pjs so these are ideal.  I also got some undies, a T shirt, some trainer socks and a couple of 'bags for life'.
I slept in one of the pairs of pjs and they did just what I wanted.  Kept me cosy but not hot.  I didn't have an hour awake in the middle of the night which seems to have become a bit of an unwelcome habit recently.

I didn't get much in Home Bargains, just some baby talc and some wax melts.  By that time, my ankle was aching badly and I knew I still had to do the allotment, so instead of exploring the pound shop, I went back to the car.

At the allotment, there were loads more runners (and I remembered my little step) plus some baby corn, some raspberries and plenty of sweet peas.  I dithered over cutting a courgette but decided it was just a little on the small side. 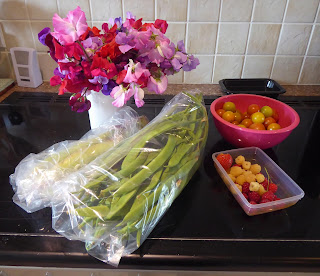 With the morning tomatoes from the garden, here's my little harvest today.  It's nothing amazing but it does my heart (and my healthy) good.
Dave is having some of the runner beans, as is my friend down the road.  There will be loads more to pick tomorrow!

On the way to the allotment, I drove past a local row of shops and noticed a drop in vaccine centre had taken over an empty shop.  I also noticed (it was hard to miss) quite a lot of teens/young adults outside, patiently queueing for their vaccines, a sight that did my heart good.

Then, later on, as I was locking the French window, I saw that one of my flamenco apples had fallen off or maybe it was pushed off as they are very tightly bunched - I should have thinned them really but didn't have the heart when there were so few - and growing quite quickly.
I thought 'nothing ventured, nothing gained' so I cut it open (I have learnt from bitter experience never ever to take a bite into a home grown apple as they are noted for their hospitality!), cored it and had a taste, not expecting very much from an immature apple.  However, apart from a slight lack of juice which another month would have given it, it was absolutely delicious.  Sweet and firm textured.  I'm looking forward to the others now - and next year's offering - and ongoing.

While I'm on the subject of fruit trees, the new Ken Muir catalogue came yesterday and I noticed there's a columnar pear called 'Beth'.  Well, I HAVE to have that, don't I?  I can't not.  That means another pot and more tree compost but that's OK, I can do that.  It also means I might have to do a bit of artificial insemination with the pear blossom from the allotment as it isn't self pollinating but that's OK, I can do that.  I'm going to end up with a mini-orchard - two apples, a plum, a pear and a fig.  All I need is the partridge to go in the pear tree.

I know it looks as if I'm spending a lot of money on the garden this year but I decided it would be a really nice way to use some of the money from Dad's estate and, as he was a very keen gardener, it seems appropriate, doesn't it?  And trees are, hopefully, a long term thing.

First thing today I have a visit to the dentist.  I *think* it is just to make the mould for my side implant but I am taking my pain killers, just in case.
After that, the allotment will need watering and there's plenty to do at home so it won't be a lazy day.
What are your plans for the day.  Whatever they are, have a good 'un and, as always, be safe.  xx