Morning, everyone.  The sun is sort of shining and I'm sat at the PC waiting for Matt the Plumber to turn up to give my boiler its annual service.  He knows I'm an early starter and always books me in at eight so it doesn't intrude into the main part of the day, bless him.

The highlight of yesterday was going to the allotment with Beth - which I guess says much about the rest of the day!

We drove down, expecting to get very hot, but at that point the sun decided to go behind high clouds so it really wasn't so bad after all. 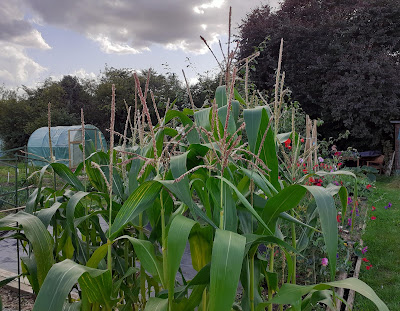 We started by picking the baby corn - there were five ready but I had picked six yesterday so that wasn't bad at all.  Alex doesn't like it so Beth was happy with five.

The photo is just of the top part because, frankly, once you start pulling off the little cobs, the stems get more than a bit raggedy. 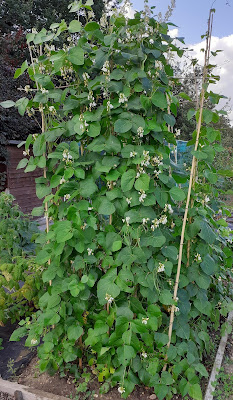 Then we moved on to the runner beans and you would not believe how many more were ready for picking.  Enough for two meals for her and Alex plus some for the freezer.
Now they really are coming in, picking is going to be a daily job alongside the watering, for a while.  No complaints from me although I will need to take some sort of stepladder for the highest ones! 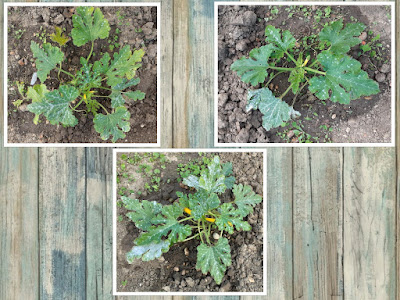 Next, we admired the courgettes for a while.  They seem to have got over their unhappy phase and are coming on a treat.  A bit late, certainly later than the two at Beth's, but there are fruits coming and they will be fine.  Another thing to keep an eye on because one moment a courgette is too small, you blink and there it is, ready to pick!
I'm so happy they have decided to make an effort.  :-) 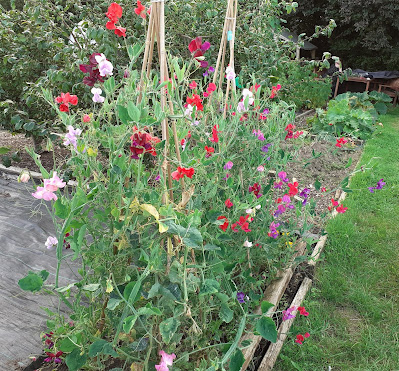 The sweet peas are doing so, so well.  It was Beth's turn to have them but there were so many we shared them so I have a vaseful making the living room smell delightful.
The five French beans that have survived the slugs and snails are doing fine.  They look a bit lonely but never mind, we will get a small harvest from them.  The ones in my garden will compensate and next year I will know better.
We then had a nice time sitting at the table at the back, talking about future plans.  We have definitely decided to have the plum tree out as, frankly, it is just too huge for an allotment (we will ask the ever helpful Jeff to do it for us); and then wait for a couple of years to see how the columnar plum does in my garden before we think about replacing it.
So, all in all, it was a lovely afternoon and we finished it off sitting in my garden with a chilled diet coke each, chatting about this, that and the other.
Beth had a friend to stay over Saturday night and on Saturday they went to a spa in Colchester for a bit of chilling.  Beth said it was lovely and we're planning to go together at some point.  So that's two mother and daughter outing planned, both very girly and self indulgent!
Today, as mentioned, it is Matt the Plumber first thing and later on I have my personal training, changed from Wednesday.  No tuition today but there is the allotment, of course.  A nice, satisfying, purposeful day really.
I hope yours is too!  xx