Morning, everyone.   It looks brighter and more promising now, at around six o'clock this morning.  Yesterday was what I would call a sludgy day - all dull and grey/beige - until late afternoon when the sun appeared and it was really lovely!  More of that today would be most appreciated.  :-)

Eileen made a few comments after yesterday's post that I'll answer in here.
I think it is the blueberry's fourth year, could be fifth, one forgets.  Last year the yield was so poor I almost threw it out as a waste of space.  I'm glad I didn't.  Now I am hoping the other younger one, the pink blueberry, will take the hint and do something apart from take up space too.  There weren't even any flowers this year!  I've taken a good look at it and decided to have some of the stems out at the base and leave the ones that are growing up rather than out as they look healthier as well and being more convenient.  I also ought to refresh the soil - I have some ericaceous compost with which to do this. As for the Japanese anemone, the leaves stay generally at around eighteen to twenty four inches but the flowers grow up to between fifty and a hundred cms (mixed measures here, I know).
I'm sorry but I can't remember the specific name and the plastic tab has long since vanished.  I've taken a photo and inserted it here in case anyone knows.  If so, could you post in the comments, please?  Thanks. 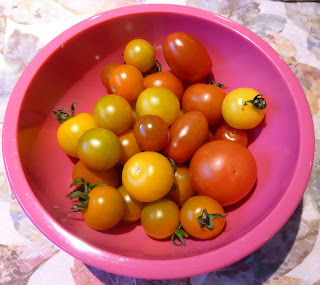 After picking and washing today's tomatoes, they looked so cheerful in their bowl (apologies for the colour clash) that I took a photo.
I'm getting to the point where I'm picking more than I can eat each day so other things swing into action.  Family and neighbours are first port of call and then I start processing them for the freezer.  Nothing too complicated - I make passata with some and some I skin and freeze whole.
I tend not to make chutney nowadays but everything is so late I have a feeling I will be left with loads of green tomatoes (for the first time in years) so Christmas presents would be a good way to go!
Yesterday was a more gentle day after several busier ones.  The Slimming World meeting was, as usual, good fun.  The cleaners turned up at a more reasonable time (I don't call finishing at half past six reasonable as I should be making my dinner at that point) which made me happy.  The house is now much more presentable which always make for a happier Joy.
Today, as it was pre-retirement, is a gentle day.  I have washing and all the trimmings and some pottering in the kitchen plus a drive to the allotment to pick and water but between times I will rest, watch telly and generally chill.  I like Saturdays, even though any day could be Saturday nowadays.
I hope your Saturday is really pleasant too.  xx