Good morning.  Yesterday was very much a day of two halves as far as the weather was concerned.  The morning and early afternoon were both beautifully warm and sunny but then the clouds rolled over and the rain started.  Right now it is too dark to tell but it doesn't feel too cold, thankfully.

Chris and I had a lovely chat in her garden yesterday while the bees buzzed and the birds sang their little hearts out.  I do love these chat hours with her - it's always good to laugh.

After breakfast, I decided to focus on the garden first as it was starting to irritate me whenever I looked out.  So I hacked and snipped and dug and weeded and planted and moved soil and pots around and by the end I was very happy.  I wish I had taken some before photos to show the difference, but here's some snaps anyway. 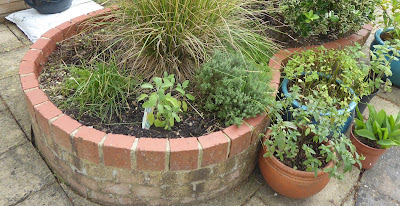 I completely cut back the oregano because there was new growth underneath and the old stuff was smothering it.  It's to the left of the chives and can't be seen in the photo all that well.  I dug out some spreading chives, planted a sage and trimmed the thyme.  I was ruthless with the mint because it will all grow back just as thick and young and fresh again.
The bin smells lovely! 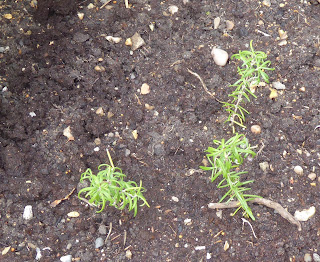 I had a lovely big rosemary bush.  Too big, in fact and Jeff dug it out for me but not until I had taken some cuttings which have been rooting merrily in a jug for ages.
I don't need three, I only need one, but just in case . . . I will eventually just leave the strongest one and have any other survivors out. 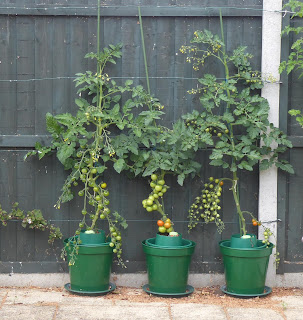 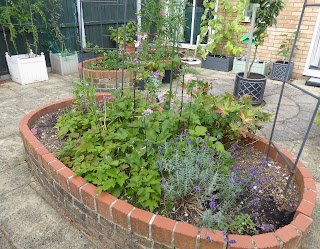 The flower bed which was just totally overgrown and messy.  It's much nicer now. 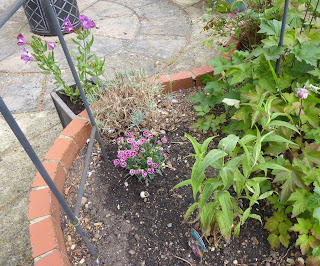 Not a clear picture but in the bed there's a new dianthus and a penstemon while the alstroemeria is now in its own little pot (thanks for the idea, Eileen). 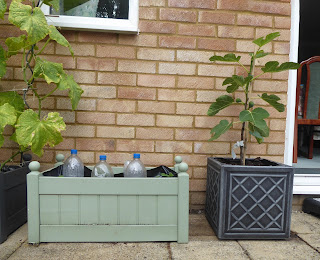 The fig also has its own little pot and, sadly, some of the emerging French beans were getting nibbled down so I've covered them with those half bottles I used to protect the strawberries from frost damage earlier on, for protection.  Hope it works. 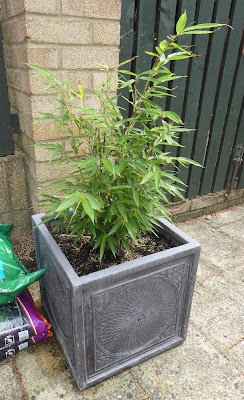 I took this because the black bamboo has more or less doubled its height since I bought it earlier in the year. 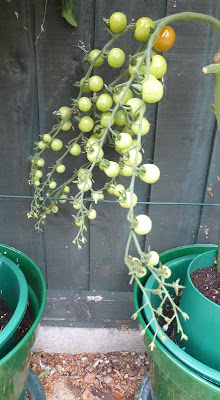 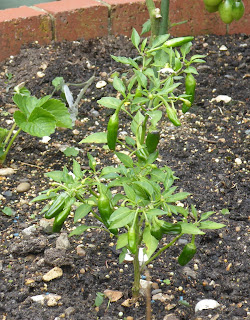 One of the apache chillies - spot the fruit!  They should start turning red soon.
After lunch, I ummed and ahed about going to the allotment but decided to see what the weather did first.  The main point of going was to water and, as it turned out, it would have been a waste of time.
So that was yesterday and I'm so glad I got the garden done.  It's not perfect but it is so very much better and I like looking at it again.
First thing today is Slimming World and I'm looking forward to that.  Then I need to get the house in order for the cleaners and I have just a bit of shopping to do for the weekend.
Depending on weather, I might honour the allotment with my presence but I'll decide about that nearer the time.
Have you had rain too?  Stay safe, dry and well.  xx