Morning, everyone.  Another dull start with dampness in the air.  It's more like October than August at the moment.
Here we are, another day further down the week and, thankfully, I slept loads better last night.  I forgot to say yesterday that Monday night was not good; no idea why, just one of those things.

It was a chilly start to yesterday.  The heating actually clicked on which was a surprise, but I didn't turn it back off, I let the place warm up a bit.
Then it started raining which put paid to the scheme of going early to the allotment so when it stopped I headed straight off and I'm glad I did, it was so pleasant.  No sun, but mild and fresh and it was nice to let the wind blow through my hair and get rid of the cobwebs.

I did some more weeding, picked loads of runner beans, munched on a few raspberries and then set to sowing some seeds.
I decided to fill the gaps in the French beans with more seeds.  Yes, it's late, but last year they were still cropping well when I had my holiday second week in October so I reckon it was worth it.  As soon as they come up, I will protect them from slugs and snails so fingers crossed.

Then I sowed another row of the Autumn cropping broad beans.  Some of the first sowing are emerging but I don't remember them being a slug target so I'm not so worried.  I'm watching though, just in case.

And the courgettes are looking pretty healthy too.  Cheers!  Better late than never.

Then I came home, just as it started raining again, and did some loads of washing, etc.

A useful sort of day but I do hope the weather is better today.  There's nothing in the diary but, weather permitting, I want to take the strimmer and mower down to the allotment and tidy that all up.  It's not long but will be if I don't get it sorted.  Then there's the never ending weeding and all that sort of stuff.

We have finally decided what we want to do with the still covered part of the plot.  It was plagued with horrible pervasive weeds and years ago we decided that covering it and letting them all die out as much as possible was the best way to go.  It's about time we did something with it and have decided to cut another bed the other side to mirror the one with the sweet peas and then pretty much a square in the middle with chipped pathways all round.

It's a bit hard to describe so I did a diagram - not very good one; for a start the pathway around the beds will be more or less equal width and it really isn't in proportion, but you get the idea. 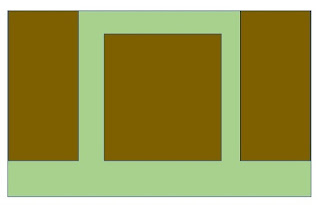 So, to the north of that area is a strip from side to side that has the pear and plum trees, not that the plum will be there much longer.

To the south (nearer the front) it is another side to side growing strip that this hear had the broad beans, tomatoes (RIP) and baby corn.  In front of that are the two apple trees.
Back to the diagram, the bed on the right is where the flowers are this year but the rest is still covered.  The idea is to cut the new beds in the Autumn and dig in some manure for working in over winter.  Next year, we plan to use that middle square for potatoes as they do seem to be very good for soil, breaking it up well and leaving it in better condition.  No idea why, they just do.
And we need to consider what else we want to plant in the additional space.  Not more of the same as we feel we have the amounts just about right really.

Anyway, enough of my rambling.  Have a super day, whatever the weather and I hope you achieve what you plan for today.  And stay safe  xx