Morning, all.  It is another dull start to the day, rather like yesterday which turned out OK with a little bit of sunshine and high clouds.  Again, a few drops of rain in the air, seen on the car windscreen but not on the road!

I waited and waited for the car pick up.  I checked my mailbox every five minutes or so.  Did anyone come - no!  When Chris came round, I put a note on the door about going round the side to the back gate.  Still no sign.
At twelve thirty, I decided that I must have goofed again so I drove into town to find out what the date really was - I didn't want them turning up today.
When I walked in, there was a look of relief on their faces.  The girl said they had been emailing me several times as they always confirm pick up before actually turning up on the doorstep.  Odd?  Not really; they had been emailing some other random address, totally different from mine.  I have no idea how that happened as they have emailed me in the past but it explained why . . .
At their suggestion, I left the car there, they gave me a lift home and the car was back just after five, all shiny (they always do a complimentary valet as past of the service) and MOTd thoroughly.
So that's that for another year, I sincerely hope.

I've not been great at posting photos in here so I popped out into the garden a few minutes ago.  The light isn't great but they're OK. 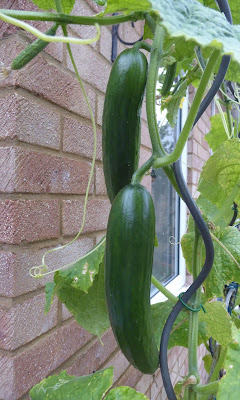 The cucumbers are going great guns now.  Apart from those two, I counted twelve others in different stages of development.  I've certainly been given my money's worth.  It's lucky I like cucumbers. 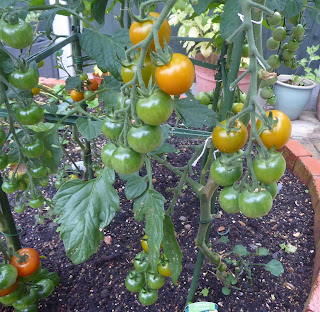 At last, the tomatoes are ripening more than one or two at a time.  I've never known this so late!  They are very tasty though and I just hope we get a nice long autumn. 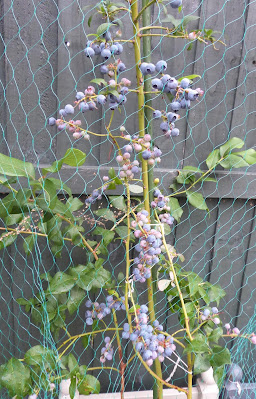 For the very first time, the blueberries have been amazing.  There's still plenty to pick too. 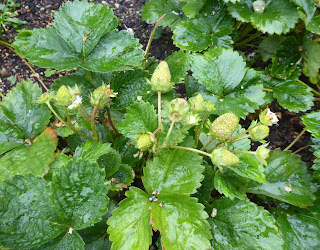 Better late than never with the strawberries.  These are not supposed to be late fruiting!  Fingers crossed for next year which will be their second year. 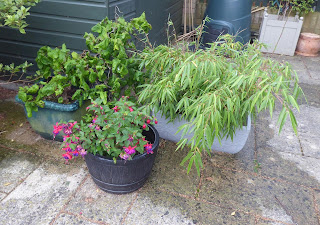 This makes a nice focal point and hides the ugly bin behind a bit. 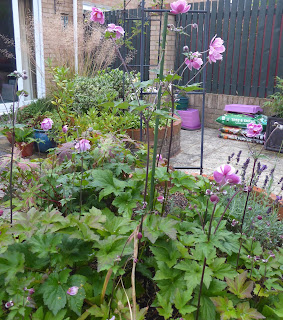 The Japanese anemones are doing well now.  Very pretty and a nice bit of height too. 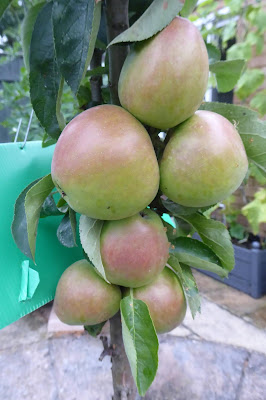 I have no idea what these will taste like but they look great and give me real pleasure each time I walk past. 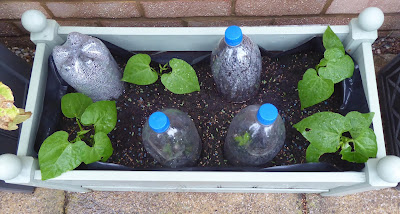 The makeshift slug protection seems to have worked.  The only one that's still looking very feeble now is the top right one but that's OK.  I should be picking by the start of September, with any luck and a good following wind.
Today there's just three things.
First of all it's the weekly Slimming World meeting which is great fun and a good laugh.  We'll see if I can remember how to book people in this week - it's complicated!
Then I need to wander down to the allotment to pick runner beans (yay) and to talk seriously to the courgettes.  Probably I need to water too.
Finally, I need to do a tidy up before the cleaners come.  It's mostly superficial mess so really should not take too long.
It's going to be a nice day, I think.  You have a good one too and stay safe and well.