Good morning.  Yet another dull, dreary start to the day.  Where has the sun gone, I'd like to know.  We could do with just a little bit around here.  :-)

Oh, dear!  Because it was raining after tuition yesterday, I decided I really didn't want to go to the allotment so I took a good look around the garden instead and it's just as well I did because . . . the dreaded blight has finally landed.
I have removed five plants in their entirety, taking off any usable fruit first.  For the others, I have removed pretty much all the leaves, just leaving a few at the top.  I'm not sure if I have left enough but as they are what catch the blight spores (or whatever they are) first, it seemed the most sensible thing to do.  Also, ventilation will be better so the leaves and fruit can dry off quicker when it rains.  I will soon find out if I have gone too far, won't I?
The last time I had to deal with blight in the garden was when one could still use Bordeaux mixture which tended to knock it on the head pretty well.

I looked really carefully and the remaining plants seem unaffected for now but I'll be keeping a close look out and I doubt I'll still be picking tomatoes in October as I often do.  It's been a remarkably short season this year but with the cold and the damp I suppose I'm not really surprised. 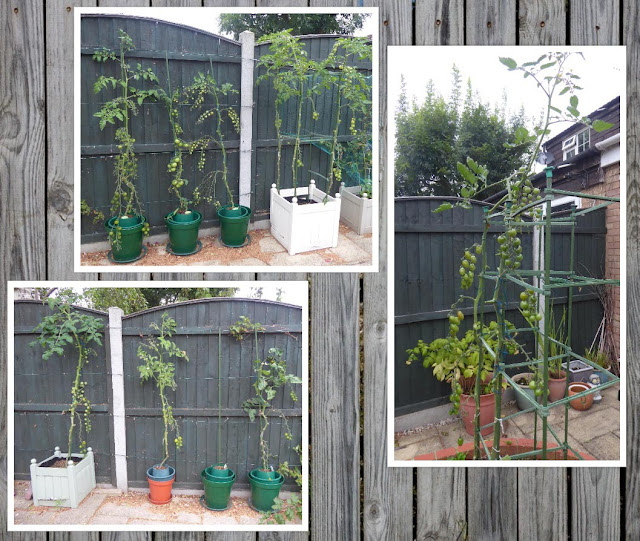 Poor old plants.  They're not at all pretty now, are they, all stunted and deformed?  However, there's still loads of fruit waiting to ripen so I'm keeping my fingers crossed and my eyes open. 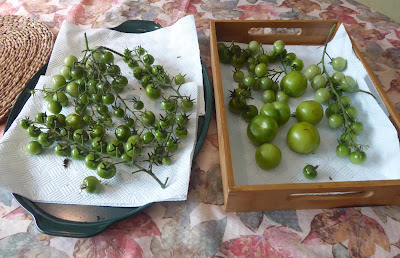 This is what I have salvaged.  Quite a lot of fruits were showing signs of being affected and went straight in the brown bin.  Some will undoubtedly ripen but some won't and anyway there's loads outside still, some of which won't turn this year (unless we get a glorious end of summer and that's most unlikely).
It's a long time since I made green tomato chutney but it is definitely on the cards this year.
If any of you lovely and knowledgeable people have trusted and tried recipes you could share, I'd be extremely grateful.  Or any other ideas for using green tomatoes.
Thank you.
Today I have an empty diary.  That being so, I'm going to have that postponed swim.  Yes, I am, definitely.  I need to take the plunge again (sorry!) and restart.  Also I have heard that B &M have some Chr*stm*s stuff in and you know what a sucker I am for festive tat so I may visit on the way to the gym!
Apart from that I have washing with the resulting drying and ironing and I have another tuition session tomorrow so need to prepare for that.  Also, I have a chutney recipe to research.
An empty diary doesn't mean a lazy day, thankfully.
Have a good one and stay happy.  xx