Good morning!  As I drew my bedroom curtains last night, I saw a gritting lorry making its way down the road and, sure enough, there's quite a frost this morning.  Brrrr.  Mind you, that means clear skies and, hopefully, a good walk later.

I never did get out yesterday.  We had periods of sunshine but there was rain in the air and it kept clouding over so I decided it wasn't worth it really.  I did pop out in the car across town to pick up a parcel.  It was a beeswax wrap making kit - I cheated and decided that for the first go I'd get everything together.  All it contained was some parchment, some beeswax pellets and some cotton cloth (I wasn't expecting that!) with some really good, clear instructions.

I was quite concerned not to get any wax on the ironing board so I put down a towel followed by an old wooden board and did the necessary on that.  It wasn't hard and I still have loads of wax left to make more.

I've wrapped some cheese up in one and covered a bowl with another one and they've both worked well so I'm really pleased.  I wonder if Beth would like some. 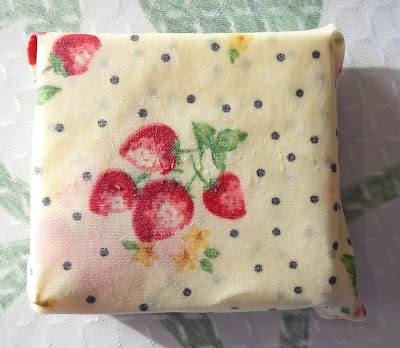 After the cleaners had worked their magic, I settled down with my knitting and laughed my way through one of the 'Goes Wrong' plays that I have recorded (it's set to record the lot as they come up).  It was my friend, Alison, who introduced me to the first one a couple of years ago, Peter Pan goes Wrong, and these current ones are just as funny and, actually, very clever in their way.

It was an evening of laughs really because the new 'Would I Lie To You' programmes, cancelled before Christmas due to the general election (boo), are now being shown and the one I watched was well up to standard.

So a bit of a lazy day really but enjoyable.

Today, as long as it's fine, I will definitely go over to Galleywood and, as I pass Tesco, I will pop in there on the way back and get a few bits and bobs; not a full shop but enough to be worth popping in for.

Before then, I have a meeting with a potential parent (that sounds odd - I mean for tuition) so I need to dig out my old list of What To Say or, if I can't find it, make a new one!  I'm quite pleased as this is down to a recommendation from a former 'parent' and starts in September, when I will have lost one of my current students to secondary school so it works out really well.

And then, later on, I need to give my pottery bag a good sort out.  There's quite a lot in it now, enough to sort into two bags, one for tools and the other for the rest of the stuff - WD40, card, clingfilm, etc, etc. etc

I've been pondering over the pottery thing and now I'm sure that I should have dried the clay off a bit first.  You live and learn.  By the end of the session on Thursday, I was inclined to forget about the candle stand and make something else but I've changed my mind and will give it another go.  I might also spray the board with WD40 to stop the slabs sticking to the board too, as trying to lift them off also distorted the shape.  Worth giving it a go, anyway.

Well, it's time for a second coffee and then to start the day so I'd better get moving!  Enjoy your Saturday,  xx