Good morning.   It's Sunday - day of rest.  There's something to be said for having one day a week when you rest and relax and opt out of daily routines.  It can be Friday or Sunday if for faith or traditional reasons or another day, but one day a week is a sound principle if it is possible.  Nowadays I have a lot more choice about 'resting' and it does help.

Today is a day of two halves.  This morning is going to be quite busy with clearing, ironing, allotmenteering and so on while this afternoon is more likely to be restful starting with coffee with a friend who is bringing apples from her tree and going away with marmalade and then Beth's coming round for a cuppa later on.  Actually, I will need to make biscuits, I think, so add that to the morning's chores! 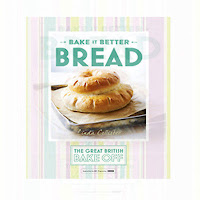 . . . this book, yesterday.  It was a spelt loaf and there were a few mini-disasters along the way, all my fault.  To start with the recipe asked for wholemeal spelt flour and I only had the lighter type.  No problem, I decided to reduce the amount of water a bit to compensate but, when I added the water, I forgot so ended up with a very lively but much softer dough.  I tried to follow the recipe that said it was to be shaped into four smaller balls placed together like a caterpillar.  I did that but wasn't sure and I was right, the dough was too soft and began to spread out, not up.

In the meanwhile, I was in the throes of making some marmalade jam and accidentally knocked the control for another ring on the hob - and the bread tray was on that ring.  Eeek.  When I realised, I scraped off most of the dough, threw away the bits that had actually cooked, reshaped in a loaf tin (which is what I should have done in the first place), re-proved and baked and it ended up as a very nice loaf indeed.  More than I deserved after that chapter of carelessnesses!

Making marmalade isn't nearly as heroic as it sounds.  I cheat and use Ma Made or the equivalent so it was a short time heating and mixing, a short time boiling, checking for set and pouring into jars!  Dead easy and very delicious.  I think I have now used up the tins my parents handed on to me, so need to get some more.

Time to get started, I think.  I'll start by making some shortbread (for today's visitors) and then tidy the kitchen properly.  Everything else should then fall into place.  I'm half way through the first coffee of the day and will have a second one while shortbread making.  This is the good life, isn't it? 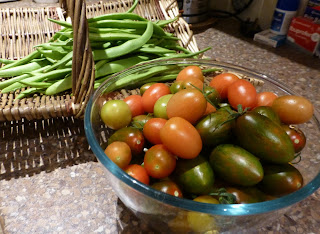 Edited to add - look what I've just picked from the garden.  That's a lot of tomatoes!