Thursday and a bit more allotment

Good morning.  It really is a good morning too with the sun shining brightly and the birds singing their little socks off.  Things did clear up yesterday and it warmed up considerably but it's nice to start the day with sunshine.  I've already got one chair out!

After an idle start to the day, I drove over to Lindsey's for personal training/massage.  After a chat about what to do, expectations, 'stop if it starts hurting' kind of thing, I asked if I could have a try on the cross trainer, the reason being I thought the movements were the kind that don't hurt whereas the static cycle does (it did at home, anyway).  I just did five minutes on the lowest setting not fast, concentrating on calves and ankles and how they were feeling and it was great.  I think getting them moving is such a safe way really worked and they kept feeling much better for the rest of the day.
It was a good session.

Then, after lunch, I pottered down to the allotment and tackled the bigger patch of weeds, accidentally weeding a random potato plant that must have come from one last year's potatoes that we just missed.  So I came home with four new potatoes, two of which I had for dinner and they were lovely!
I also came home with another load of broadies, some of which went next door to Jenni who has been great in watering my pots while I was at Dad's. 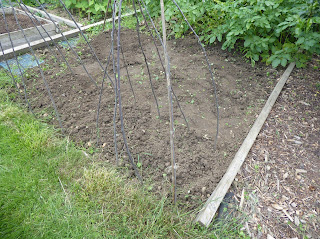 See - much better.  Not perfect, it needs another hoeing/raking thing, but so much better.  Civilised again.  That's where I'm going to plant the dwarf French beans bit I will leave that until after I'm home from the funeral next week because of watering in.  The support canes have rather come undone so I'll mend that today probably. 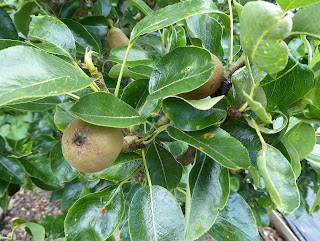 Here's the baby pears that didn't show in the photo I took on Tuesday.  Not as many as last year but plenty, all the same. 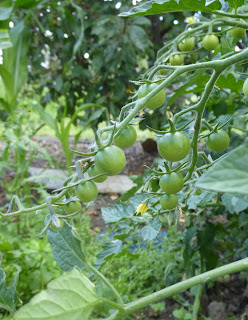 Tomatoes.  I so love tomatoes and can never have enough!
(I also had the great excitement of noticing that one of my tomatoes at home is showing a little orange tint.  Not enough to show on a photo but still - definitely starting to ripen.
And some of the blueberries are turning blue.  Lovely!) 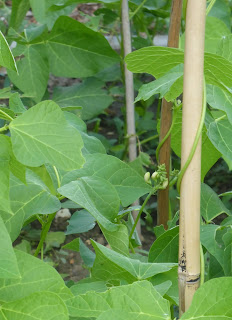 And my first flower on the runner beans.  They are self pollinating so should get going nice and soon.  Another excitement.

(I do get excited over daft little things, don't I?)

Apart from the repeated pleasure of shelling broad beans in the afternoon sun, the rest of the day passed as usual.  I slept extremely well.

Today, Chris is coming round for coffee and chat this morning and after that I will trundle in the direction of the allotment.

On the list today is:
weeding
picking broad beans
weeding
mending the support canes
weeding
pulling some rhubarb, maybe
checking the strawberries and directing the runners towards the empty raised bed
weeding

That's enough to keep me out of trouble, isn't it?  I'll get there!
Have a super day and enjoy the sunshine.  xx