Good morning, everyone.  After a dull start yesterday, out came the sun, up went the temperature and it turned out to be a beautiful summer day.    Lovely after such unpleasant, non-summery weeks as we have been having.  It's looking promising this morning too although auntie Beeb indicates it might turn a bit dull later on.

Well, yesterday was a good day.  The Morrisons order was fine; there were some subs but they were appropriate so no complaints and the fruit looks in good condition too.

Then I met Jeff down the allotment.  I was quite heartbroken when I got there - after all my hard work earlier in the year, it looked a right mess.

Then I looked again and thought maybe it wasn't so bad after all. 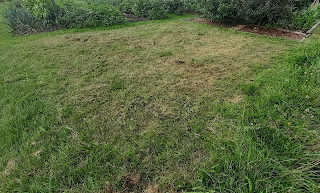 The grass was terrible, but not as terrible as the one next door which hasn't been touched all year apart from the bit I did occasionally earlier on in the year.  However, after Jeff had given it around forty five minutes, mowing and strimming, it looked much more civilised.  It's never going to be a great lawn but at least it looks under control now.  It was the grass that was bothering me more than anything and it is an inexpressible relief that it's done.  It's fully how the comparatively little things cause such a worry, isn't it? 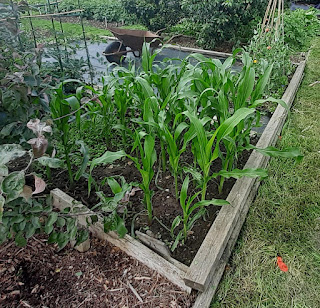 The baby corn is definitely coming on.  If you look carefully, you can see where I stopped weeding. 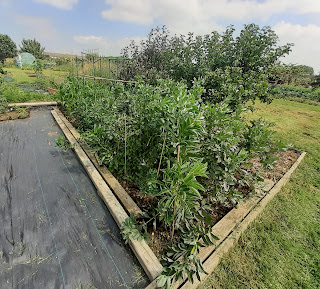 The whole of the front section looked pretty productive and there were loads and loads of broad beans to pick.
The tomatoes (between the broadies and the corn) needed a lot of side shooting and tying up, but they are coming on - every plant has one truss at least and I'm happy with that, given it isn't the ideal place for them.
I've weeded part of that section but there's more to do - tomorrow, maybe? 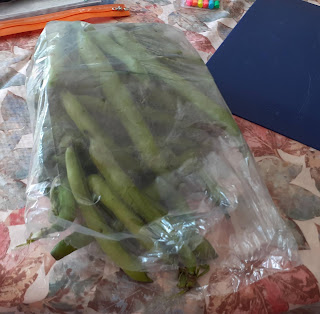 So many broad beans!
This bagful only scratches the surface of what there is to pick so I'll be handing some round and freezing some too.  Last year there weren't enough to freeze so I'm very happy how they have done. 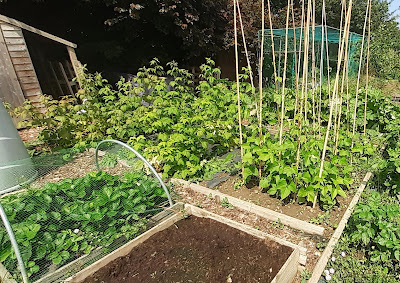 The strawberries, raspberries and runners are all fine - shame about the weeds but their Time Is Up! 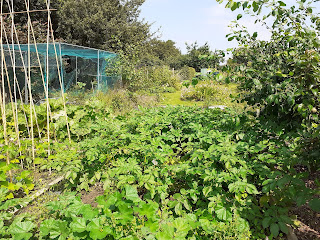 The potatoes look as if they are pretty much ready.  I can't dig or fork yet - it hurts - but Beth and I will meet there on Saturday and have look see.  I expect I will be taking some to Letchworth for John and me to share for our dinners.
(please ignore the weeds in the foreground!) 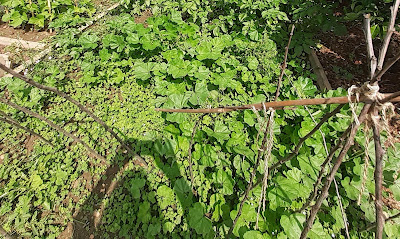 These horrible weeds are also on my Little List - or maybe that should be my Actually Quite Long List.
Where DO they come from!!
If I go down again this afternoon (and I might or might not), this is what I will tackle.  It looks terrible. 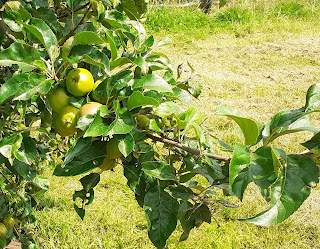 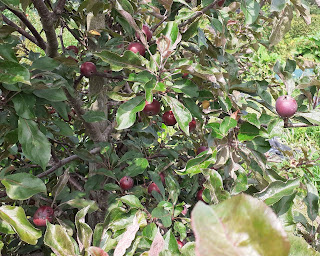 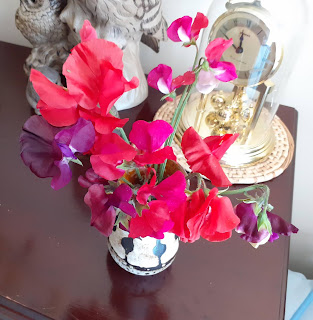 The sweet peas survived and these are scenting my room beautifully.
OK, so it wasn't comfortable at times and I had to move very, very carefully, but I felt so much better for a couple of hours at the allotment.  If I spend an hour or so tomorrow, Thursday and Friday, I should pretty much be able to deal with the weeds and then it's just keeping them down.
That was in the morning.  In the afternoon it was sunny and warm so I got out my garden chair, a trug (for the shells), the broad beans and a bowl and took a dive right back into childhood when Mum and I used to sit out, bowl in lap, shelling peas or broad beans for dinner while the washing flapped around in the breeze.
For the first time in ages I felt uncomplicatedly happy and relaxed.
After I'd shelled the beans, I got my Kindle, made a coffee, reclined back and - you know what's coming, don't you.  Yup, I fell asleep with the warm air blowing and the birds singing.
Such a restful afternoon.
And then I went and spoilt it by tweaking one of my calves again putting the chair away.  Ah, well, just One of Those Things.
Today I have just one thing in my diary.  That's personal training at 11:45 which will be a mixture of massage and work on upper body strength and core.  Nothing to cause any more problems.  I'm looking forward to that although I am sadly out of condition after the last month.
Then I think I will come home, change, have lunch and then drive round to the allotment to weed.  That won't cause any damage as it's all done sitting/kneeling and I can always leave the weeds in a pile if I don't want to take them behind the shed to the compost heap.  I can pick some more broad beans too.
Having better weather certainly does open things up a bit more.
Have a great day and I hope it's nice where you are too.  xx