Good morning, everyone.  After some real downpours yesterday, today has dawned nice and bright with clear skies and a cool, fresh feel.  Beeb says it will be lovely and sunny all morning - great!

I sat down with the relevant catalogue yesterday morning and did what I have been planning to do for a while - ordered a couple more Minarette fruit trees to keep the Flamenco apple company.  Nothing too adventurous, just well known, popular ones.  I ordered a Braeburn apple because that's a favourite, and a Victoria plum because I think we've given up on the allotment one.
The Braeburn flowers at the same time and the Flamenco, so that's sorted out the cross pollination issue and the Victoria plum is self pollinating (says the catalogue).
And then I went slightly bananas and also ordered a fig tree, to be kept in a container with a root restriction bag.  That was rather an impulse buy and I need to read up about them but it's quite exciting!

I don't think they will come until October so that given me time to get pots and soil, etc.

That was yesterday's little extravagance but I've done two tuition sessions this week which has gone a bit of a way towards covering the cost.  Not entirely but better than nothing.  And I got a tax rebate, of course, so it's all fine.

After tuition, I had a lovely fruit platter for breakfast and then set off for personal training with Lindsey.  Half exercise and half massage, the same on Friday and then back to the usual hour next week.
By the time I got home, Beth had arrived and Sharon was busy doing her hair.  Then she did mine and I'm really pleased with the results.

While she was working, the heavens opened outside which put paid to any need to go and water the allotment.  However, I wanted to go and see how the courgettes had settled in so I went anyway. 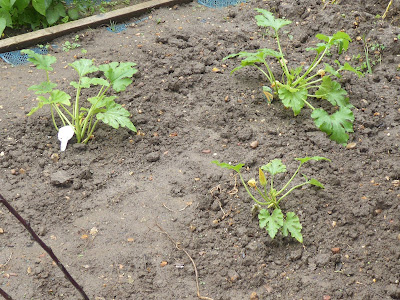 As you can see, they look quite happy at the moment so fingers crossed.  At least we have tried.  At a pound a plant, one can hardly go wrong really. 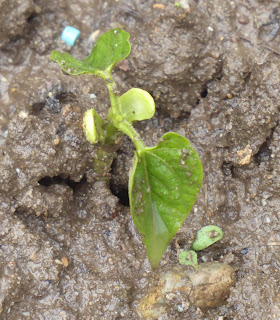 The first dwarf French bean to emerge is doing nicely and several others are racing to catch up.  Nice
I remember from last year that, just as the runner beans were slowing down, these were ready for picking
Eileen sent me a link (many thanks to you, Eileen) to an online shop that has some Autumn picking broad bean seeds.  I've never heard of these before but it's worth a try so I ordered some.
Then, coincidentally, Beth messaged me to ask if I realised that it wasn't too late to plant some more mangetout - we lost the first planting to marauding pigeons.

So that seems to have sorted my 'what to plant' question.  Thank you very much ladies.
On to today.
I am hoping that Chris can come round for a garden chat or online if the weather doesn't play ball despite the forecast.   Also, I managed to get a slot for PYO strawberries at Lathcoats later on in the morning, so I am very much looking forward to those two things.
Apart from that, I'm hoping to weed down the allotment and to talk to the courgettes and keep them happy!  I could clear the rest of the broad beans; they are really well over and past it now.  That would clear some space for the new sowings when the seeds come.
I'm hoping for a nice, easy day.  Hope yours is too.  xx