Good morning.  I'm up very early and it's only just starting to get light so it's hard to tell what it is like out there.  However, Beeb predicts light rain showers for at least part of the day.  Not enough to avoid an allotment trip, I suspect.

Yesterday's trip to the allotment was quite exciting (in a small way).  Everything was nice and wet, which was good; no need to water. 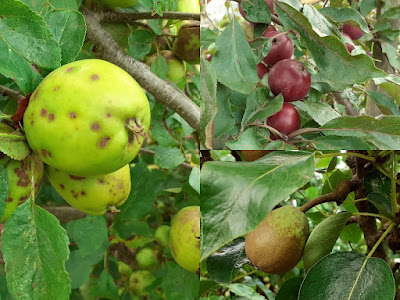 Three of the four fruit trees are bearing but I don't know what's happened to the laxtons (or whatever they are).  Most of the little apples, although not all, are covered with these little brown blotches.  Do any of you knowledgeable people out there know what the problem is, please.  The redlove seems fine.
The poor old plum is not only trying to reach to the moon, it's also got very unhealthy, curled up leaves.  I will have to look that up.  I truly think it will have to go. 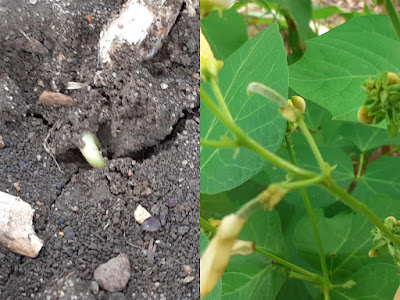 Two babies.  The one on the left is the second dwarf French bean to emerge from see sowing last Wednesday.  So nice and quick!
The out of focus one on the right is what seems to be the first couple of baby runner beans.  Good-oh!  Fresh picked runners are just about my favourite veg.  I must remember to pinch out the tops of some of them today as they're reached the tops of the canes. 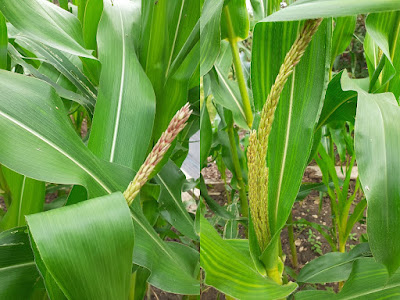 The baby corn is now flowering and there are definitely some little corns all wrapped up in their leafy beds emerging from the stems.  One has to pick them before the silks emerge from the ends or they get tough and woody, unlike the usual corn on the cob.  They're not just immature corn, they won't grow into big cobs if left, they just become inedible.
I'm thinking maybe about a fortnight.
Exciting. 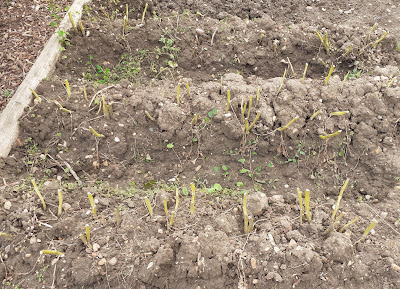 The poor old potatoes look very sad after last week's blight protection measures.  However, there's gold in them there ridges!  Must do some weeding there today.
I started pulling up the first planted row of broad beans.  They were looking very manky and blackfly damaged, no more flowers and only a few pods.  The other two rows, planted a but later, can stay for a short while but they're not looking all that much better really. 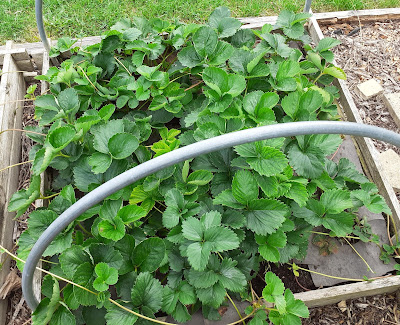 A lot of this leafage is actually quite healthy and well grown babies on the runners.  They can't reach the new bed so I will let them be until Autumn and then cut and replant them and hope they are strong enough to survive.  There's more berries coming on here as well as in the garden.
After some weeding, I came home with six raspberries (for breakfast today), some broad beans (which went into the freezer) and another little bunch of sweet peas.
I looked up what to plant in August and there isn't really all that much I am interested in so I may very well give the empty patches a good forking over and see if there's any well rotted manure in the corners of the communal manure pile.  Perhaps, this year, I will get around to planting some over winter broad beans.  Maybe . . .
I still think I'll take a trip to the local garden centre to see what they have . . .
At home, the first red tomato seems to be ready to pick.  Just the one but it's a start.  There's nine cucumbers growing rapidly (neighbour handouts, I guess) and a few more strawberries plus an awful lot of blueberries which I must make the effort to pick today.  The netting is pretty effective in stopping me as well as the birds!
Going to the allotment was the highlight of yesterday but today is more busy.
First I have tuition with my student who carries on through the holiday.  I have two sessions this week for a very good reason and today I've dug up a mystery maths challenge game for a bit of fun.
Then I am off round to Beth's for coffee.  She is doing mostly admin work today so can work around a chat over coffee which is nice.
The afternoon is lazier but I have more ironing so will get that done while watching something on telly.  There's also the usual trip to the allotment later on in the afternoon, assuming it doesn't rain.  I might take the mower with me this time (and I might not!).  😏
I'm looking forward to today; it should be fun.  I hope yours is good too.  Be safe and happy.  xx