Morning, everyone.  I have a slightly muggy head and that 'eaten too much' feeling but that's OK, the head is clearing rapidly aided by copious amounts of caffeine.
The sun was shining earlier but it seems to have gone away again now.

I had a nice, leisurely stroll around Sainsbury's and yes, clothes . . .  I was terribly brave and have bought a pair of denim knee length shorts - sort of not baggy Bermuda shorts, I guess.  I haven't worn shorts since I was a little girl and had no control over what I wore - children didn't really in the olden days.  But, actually, they look quite nice on me.  The other two were some plain and very useful tops that really will go with anything.

One home, I set to and got everything ready.  Table cleared and laid for a buffet, chairs and little tables out in the garden, a few things made including the strawberry coulis (no rhubarb) which turned out lovely and generally got everything absolutely ready.

No allotment - I didn't fancy it in the end and yesterday was about doing what I wanted to do.  :-) 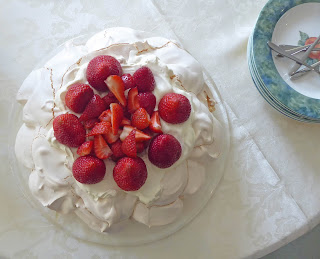 The pavlova turned out lovely.  OK, so the strawberries are a bit wonky (which is why I've also included the photo below) but, wow, it tasted great! 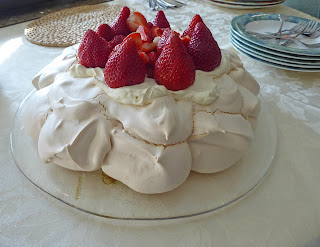 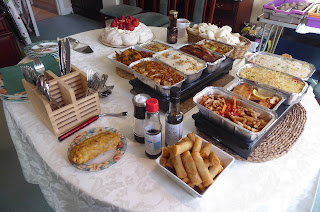 And this was the buffet!
We sat outside for ages.  After a while I got all my fleeces and the lockdown blankets (I knew they would come in useful) and, after a while more, the halogen heater and the hot air blower.  Needless to say, fairly copious amounts of fermented grape juice was consumed!!
I gave up in the end and came inside but the tougher younger generation stayed out for a while longer.
I was up early so all the leftovers are now sorted and in various piles for taking away.   I don't want any more so isn't it good that I have people to offload them onto.
It was a lovely day.
Beth and Alex are still asleep so I'm just pottering.  The washing machine has just finished a load so I must get that out and start washing last night's tablecloth which took a fair amount of spillage.  Once their day starts, after breakfast, Beth and I will be going down the allotment and coming back with rhubarb to make rhubarb gin with.  I've made fruit gin before but wasn't sure whether one was supposed to cook the rhubarb or what.  I looked it up and all you have to do is bash it about a bit so I'll probably pop it in Thermione for a few seconds.  Then you add it, some sugar and the gin (or vodka) to a bottle or, in our case, a ginormous kilner jar and shake it daily until all the sugar has dissolved before putting it in a dark place for the sugar to work its magic.
It says ready in two weeks but that seems rather short to me.
After that, I will spend the rest of the day just pottering again.  It seems to have been a very lazy weekend.
Has yours been good too?
Well, the sun has come out again, the washing won't peg itself to the line, nor will the line walk out of the shed and set itself upright in its hole, so I'd better get going.
Have a super day, whatever your plans.  xx