Morning, everyone.  I hope you're all well.
Another frost this morning and we're predicted another early Friday morning and then it looks as if it's going to warm up.  The sun's shining though - lovely!

There were some changes to yesterday.

I drove down to the allotment but, because of forecasts, etc, didn't take off the fleeces.  They really must come off tomorrow though, they have been on long enough - this cold snap really has gone on.
However, I did plant out the broad bean babies as they are pretty tough really.  They had all flopped over in their pots and they flopped over in the ground too but should pick up quickly.  I don't plan to visit the allotment but might take a detour on the way back from swimming, just to check them out. 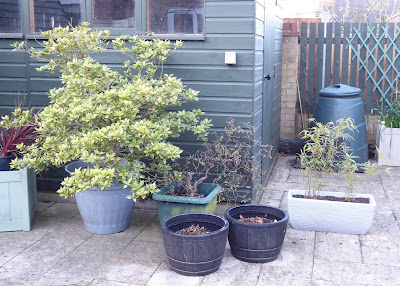 I was feeling green finger-ish when I got home so planted the apple and the other bamboos into their pots - I decided to put the apple in a pot that is perhaps bigger than I had planned but I had it to hand!  I now need to get plenty more potting compost before the tomatoes go out.  There's plenty of time but as time is passing very quickly right now, it's something I have put on my to-do list.

You can see what I mean about hiding the bin a bit when they've grown, can't you.  I need to push the twisted hazel a bit to the right and the two pots in front (which will also need to be moved a little bit) are fuchsias which are lovely in summer and autumn. 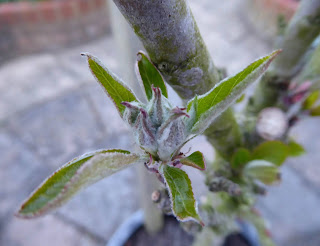 I might not get much fruit from the flamenco apple this year but it looks as if I will definitely get blossom to pretty the garden up for a week or so.
The problem will be pollination - there are other fruit trees in the neighbourhood but the redlove never did all that well until it was moved to the allotment; that's why I really want to have two columnar style apple trees, not just the one.
While on the subject, I have only just learned that apple trees are classified as to when they blossom, A, B or C.  Did you know that?  To maximise pollination, it's best to have two of the same classification.  The flamenco is C and so is the redlove.  A shame they're not in the same garden.

Now we can, I go to Lindsey's for personal training but a message pinged into my mailbox telling me that I should expect a parcel in between 11:46 and 13:46 that required a signature - conveniently messing up both personal training and driving over to Val's.
I fired off a message to Lindsey asking if we could do it online (of course, said she) and then one to Val to say I might be late.
As it was, the 'parcel' arrived slap bang in the middle of the predicted times (and personal training) so that was OK.  It was the exercise bike - some parcel!!  And they didn't need a signature but I suppose it was too big to just leave outside

I had a very pleasant time at Val's, taking over some magazines and some rhubarb and receiving in return a very nice mug of coffee and some yarn!
It was jolly cold, even with rugs, quilts, etc, as we stuck it for about an hour before deciding enough was enough and parting company.

The rest of the afternoon was spent putting the bike together.  It wasn't complicated, just fiddly and the instructions were barely adequate.  Never mind, I got there in the end and had a go while watching some telly.  I am hoping I will use it daily - something positive to do while telly goggling, isn't it?

Today is another comparatively busy day.
At eleven I have another swim booked and plan to go earlier so I can do Matalan this time.  I'll let you know what I get, if I get anything.  If there's time and it's not too busy, I might stroll around Home Bargains as well.

I have a chat with Chris this afternoon but whether it is in the garden or online depends on the temperature.  We will see.

And finally, it's SW on Zoom early evening.  I'm looking forward to that; they can be great fun and with my new loop PC gizmo, I hear an awful lot more.  Face to face meetings are resuming on May 17th - the week I will be away on holiday.  Ah, well, that can't be helped.

Have a great day, everyone.  xx