Good morning, everyone.  I'm up before the lark this morning; it's hard to say what the weather is like but the forecast is lovely - not all that warm but in the low teens and more sunshine is expected.  Lovely!

Yesterday was a very productive day.  I got my shopping done in Morrisons so now I am more or less set up for the week ahead as well as for this evening.

Then I set to and sorted out the house in preparation for the cleaners.  The sheets were changed and the spare room is now ready to receive guests.

Downstairs again, I dug out a recipe on Cookidoo (the Thermomix recipe site) and sent it to Thermione before making meringue for the base for the pavlova I'm making instead of a cake.  To be honest, it is a doddle in Thermione and, after baking, cooling, etc, here's the result.  It's bigger than it looks in this photo. 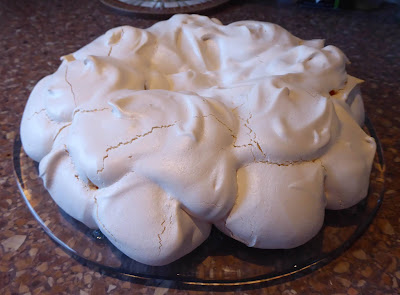 It's going to be so delicious covered in cream and fresh strawberries.  Later on today I'm going to make a strawberry coulis (or maybe strawberry and raspberry) to drizzle over the top and I'm getting some chocolate sauce too.  May as well go the whole hog!
While the cleaners were working their magic, I went to the allotment to water, noting, as I did so, that those pesky weeds are yet again fighting back.  |Better news is that the new raspberry canes are starting to send up new growth and there's loads and loads of rhubarb.
Later on, Dave popped round to leave the alcohol for tonight in the shed and also to store some meat in my freezer.  He didn't stay but it was lovely to see him.
Today I'm up at stupid o'clock but that's OK, it's my day and I'm enjoying it already.  I'm glad I got everything in the way of housework done yesterday because I can just do what I want today.  Lovely.
I'm popping to Sainsbury's to do a small shop.  It's Sainsburys because I need to fill up with petrol and also because - well, clothes, you know.  Next month's pension went in yesterday.  Also on the list is gin because Beth and I plan to make some rhubarb gin now that there's loads ready to pull.  Thinking about it, maybe I could make a rhubarb and strawberry coulis instead of just strawberry, those two being a flavour marriage made in heaven.
When did a simple fruit sauce get such a fancy name though?
I also want to go to the allotment, partly to do some weeding and watering and also to pull the rhubarb.
Once home again, I'll get the table set for tonight, do any cooking/baking, get out the garden chairs, cushions, etc, and then I will settle down to knit, catch up with my youtube channels and, hopefully, have a bit of a kip so I won't be too tired this evening after my early start.  The family will turn up early evening for an appropriately distanced time outside.   Dave and Anna are going to phone the Chinese order through and pick it up so I hardly have to lift a finger.  Spoilt?  Moi?
It's going to be a lovely day.
What are your plans?  xx