Morning, everyone, happy Sunday to you!
It's cold out there with quite a frost.  The strawberries have their plastic hats on and Beeb says 'heavy snow showers' between seven and eight this morning - weird for a third of the way through April but there we go, when was our weather ever not weird at times?

More parcels arrived yesterday, mostly for Beth, but both my potting tray and the bottle watering can lids arrived, the latter quite a surprise as the bumph had said not till the end of next week.  I tried one straight away and, to my great delight, it fitted my big two litre plastic bottle perfectly.  Much better for watering the plantlets than my little indoors watering can. 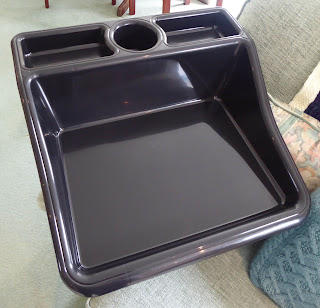 Eileen, this is the potting tray.  The soil you are using goes in the main body of the tray and that's where you do all the potting and the bits at the top are for marker pen, labels, twine, envelopes of seed - whatever one needs for the task.
It's bigger than it looks in the photo and, I think, is just what I hoped it would be; a perfect size to sit on the fold up coffee table I use for this work.  A shame I couldn't christen it yesterday but I'd already done the sowing/potting on.
In the morning, I sowed some Ailsa Craig tomatoes and some purple sprouting broccoli so there's that excitement to come.   I also potted on some leeks that I bought in a garden centre, I forget which one.
The babies are coming on nicely, I think.  I know it is not idea having them in the house, but they have to, in lieu of a greenhouse.  I'd dearly love a greenhouse, a proper heated one, but there's no room really.  Maybe I could investigate one tucked in by the shed . . . hmmm, I wonder . . . 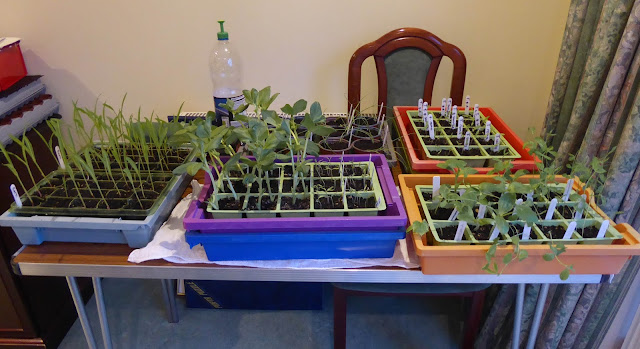 Front from left to right:
baby corn
broad beans which must go out this week.  They were supposed to be replacements but all the first row has come up so it would be reasonable to expect that the second row will do so too.  These can be the third row, the seeds for which which I haven't sown yet.
then there's some baby tomatoes in the same tray as the broad beans
finally, there's sweet peas (also pretty much ready to go out), courgettes and cucumbers.  The courgettes seem to be doing well but I'm not so sure of the cucumbers - I might sow a few more.
Back, right to left:
loadsa baby tomato plants
hidden behind the broadies, the leeks and the newly sown tomatoes and spinach
I'll be starting the runner beans in pots in a few weeks, after some poor experiences over the past few years sowing them directly outside.
Once all that's grown and out, that's pretty much a full allotment plot! 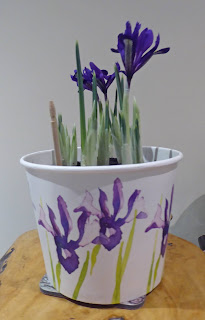 Three or four weeks ago, M&S were selling pots of planted mini-irises for £3 so I treated myself to one.  They're just starting to come up and out and they're lovely.  Of course, once they have finished and died back, they will go in the garden to give year after year.
The two planned things yesterday didn't actually happen.  Jeff postponed the shed work because of forecast rain which, of course, never materialised and Beth stayed home in the afternoon which I had half expected anyway.
It was a good day though; restful and productive, what with the seeds and getting on with the knitting.
Today, I'm spending the morning in and then going round to Beth's for lunch.  She is doing a stir fry, I think, and I am taking over a rhubarb and strawberry crumble with custard for dessert - allotment rhubarb, of course.  The rest of the day will be nice and quiet with some ironing, some exercise, talking to the plantlets (of course) and knitting.
Having muttered about 'heavy snow showers' predicted between seven and eight, the sun is shining (at six thirty) and the skies are clear.  We will see.
Well, I'd better get that crumble topping made, it won't make itself.  I must also get all Beth's parcels into a bag or I will forget them.  Have a lovely day, stay warm and be happy.  xx