Morning, everyone.  It's been a very cold night and there was a heavy frost first thing, as the banner photo shows.  The sun is shining brightly so it should soon thaw but I am very glad I did this yesterday. 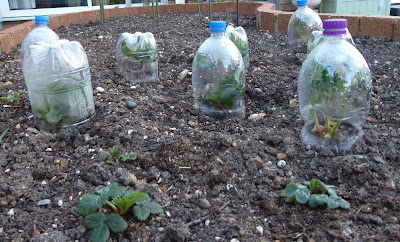 Here's hoping I've done the right thing.  The two little plants I didn't cover look pretty chilly but - well, we will see.  At least they're a lot easier to take off and put back than the fleece so once the temperature is more reasonable this morning, I will uncover the plants and re-cover them later on.

I didn't take any protective measure with the blueberries so here's hoping.

I spent some time down the allotment yesterday and now the potato trenches are ready for action.  They aren't that straight, I'm no expert, but I don't care and nor will the spuds!  It looks a bit messy in the photo; I ought to have brushed the sides but there we go, it can wait.  Four trenches so that should keep us in spuds for a few months.  We're planting Charlottes as they are a favourite with us both. 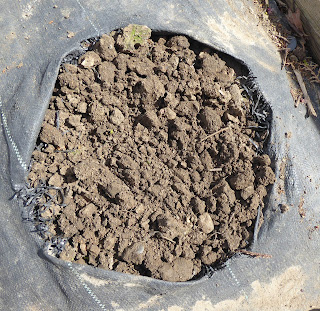 Here's exciting photo of soil no. 2!
In preparation for the new raspberry canes, I forked into where each plant will go and loosened/broke up the soil before forking in some slow release general fertilised.  Our policy of covering the soil around them seems to have worked in keeping the nasty weeds down - there were very few of those white rootlets in the soil I forked and one would have expected there to be as that's where the light is.  I'm very happy about that.
Beth has suggested that when the canes are in, we chip over that section too.  Good idea, it will look so much nicer and, over the years, the chips rot down and then they can be swept up and dug into the soil.
Good news about the broadies - every one of the first sowing has now emerged apart from the one I found dug up (cat?) three weeks or so ago.  I have sixteen 'gap' plants, all strong and healthy at home so, one way or another, we will be OK for broad beans.
There's a strong sense of waiting patiently down the allotment at the moment.  Loads of people seem to have rediscovered their plots over lockdown, so many more plots are being dug over, fed, organised and made ready and it's a nice place to be.
There's really not a lot else to do right now.  Keep the grass cut, the weeds down, repair the shed (on Saturday, fingers crossed) and that's about it for this week.  The spuds go in maybe Saturday, the sweet peas next week as soon as I can pinch out the tops, and the rest has to wait.  I suppose I could plant that third and last double row of broad beans, again next week.
Today starts with housework and moves on the personal training.  Then it's an online chat with Val (way too cold to sit in the garden) and that's about it.

Have a great day and I do hope you have sunshine as we do here.  It's cheerful!   xx