Good morning, everyone.  It seems a very long time since I wrote my blog but it's only been two days missed.  It's nice to be back.

It looks rather gloomy outside at the moment although Beeb says it could be quite a nice day later on.  I'm hoping for a good downpour at some point soon, a really good one as the ground is so very dry.  I'm glad Jeff was over yesterday morning and watered the pots for me.

While on the subject of gardens, the new ballerina apple tree is sporting just two heads of blossom (one shouldn't expect anything first year so anything is a bonus) and they will be opening soon - possibly next week.  I believe the redlove is at the same stage so I will bring some redlove blossom home to see if I can do a manual pollination.  The chances of just two blossom heads being pollinated naturally with no other tree in the garden is fairly minimal!
(and I must remember to get another codling moth protection thingy)

All the new plants are surviving - the little tree, the bamboos and the leftover raspberry cane - so that's encouraging.  As for the baby plants . . . 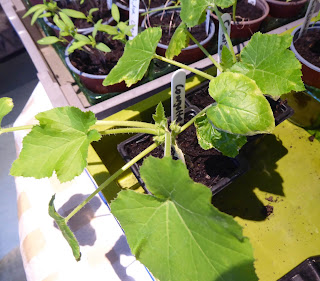 . . . the courgettes are doing extremely well, much better than last year, 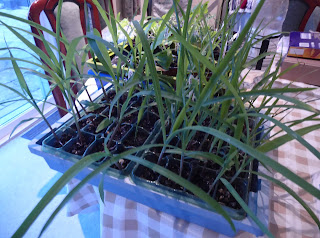 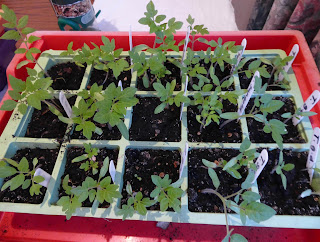 and the tomatoes really do need potting on so that's a job to do in the next few days.  It's time they were in individual pots and will definitely be ready to go out by the May half term holiday which is, for me, traditionally the time to plant them out (in between writing school reports which, thank heavens, I no longer need to worry about).
Must start thinking about the runner beans and the mange tout as well!
I didn't go to the allotment yesterday but may very well detour there this afternoon to do some watering as it's been so dry.
It was nice seeing Dad again and we sorted out a few things for him. I took him to his GP appointment and also to the barber for his first proper hair cut in months.  It's surprising how much better one feels after a haircut, even for a 92 year old!  I'm glad I went, it really was necessary and am doing the same thing next week.
After my drive home yesterday morning, I had about half an hour to get changed before driving over to Lindsey's for the personal training hour, the first one in her new studio.  It was great and the gym, swimming and home cycling have obviously had some effect as I found the exercise bike and cross trainer much easier than I did a fortnight ago (we couldn't have a session last week).
Then it was home for a quick lunch and over to Val's for our weekly chat.  We had planned to have a walk round Cressing Temple but neither of us felt energetic enough so we just sat and chatted over coffee.  Then I drove home again and by the time I got in I was shattered so had a gentle evening and was tucked up in bed and fast asleep before eight thirty.  I have the delights of Sewing Bee recorded so that's something to look forward to.
Today is, again, quite busy.  I have an online chat with Chris, a gym and swim session, watering the allotment and then the SW Zoom meeting.  They're mostly 'me' things though so not emotionally or mentally draining.
Have a great day, everyone.  Stay safe and well.  xx