Good morning, everyone.   It looks pretty clear outside as far as I can tell and I gather today is supposed to be a really nice day (which makes up for tomorrow which is supposed to be horrible, says the Beeb).

Yesterday morning was pretty straight forward, thanks to the work I put in on Thursday.  I went out into the garden and cut down as many of the remaining tomato trusses as I could see and they are now all laid out on trays in the living room.  I wonder how many will ripen.  I think I can see green tomato chutney on the list of things to do at some point soon.
Also, looking at the cucumbers (which really are a bit sad now with browning leaves and stems), it's not given up yet.  There's one more lengthening although not as quickly as they did in the summer and there's another baby just starting.  I wonder if they will come to anything;  it's getting colder and there's less light so I wouldn't be surprised if  neither of them reach maturity.  I'll definitely be growing cucumbers again; they've been brilliant.

I drove up through sunshine and showers yesterday.  A really easy journey although I got my sat nav totally confused as it kept trying to send me in other directions although, to be fair, it's not an easy address to enter and I just went with the post code.  For about half the journey it seemed to be trying to get me onto the M11 and after that somewhere else (not sure where).  I must check the map and see if I can work it out.
So I was very glad that I worked the route out so thoroughly.
When I come again (and I will, it's almost a tradition now), I will come the same way.  Even the bit I had been dreading - into Bury St Edmunds, join the A14 for a short stretch and then off again) was a doddle.

I won't tell you how many bags of stuff I had to unload from the car but suffice it to say I will be very comfortable this week!

Here's the view from my balcony. 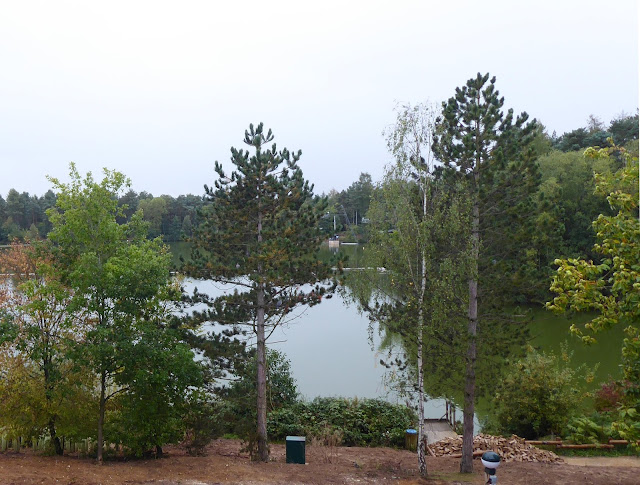 The light isn't the best (it was drizzling) and actually I'm not so sure higher up means better views after all.  It's nice though, really peaceful.

Well, it was really peaceful once the machines had stopped.  If you look at the bottom, you can see a pile of bricks.  That's because they are doing something to one of the pathways and yesterday afternoon (during changeover which is sensible), machines were levelling and flattening the underlying stones and making a terrific din.

This means that my favourite scenic route pathway to the shops via the beach is not accessible so I will have to look at the map and find another way.  I could go straight there but that's not the point, it's all about the early morning walk before most people are out and about and those who are all smile and say 'good morning'.

After I had unpacked and had coffee and lunch, I set off to the village centre, strolled around the shops, looked at the Christmas decorations (might get one as a momento), went into the sports hall and watched a group playing badminton, then walked back again to my apartment.

Here's a few photos of my home for the week.

The kitchen, nicely set up with (from left to right) bottle cooler, fridge and dishwasher.  Yes, that's Thermione at the back and, if you look carefully elsewhere, you will see my waffle maker.  I intend to eat well! 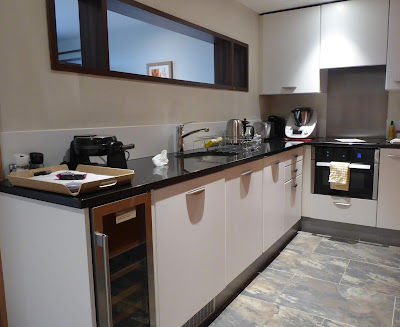 The washing area with a shower going off to the right at the back. 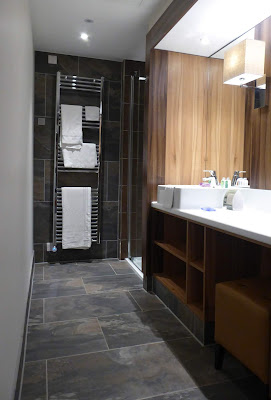 And two views of the main living area. 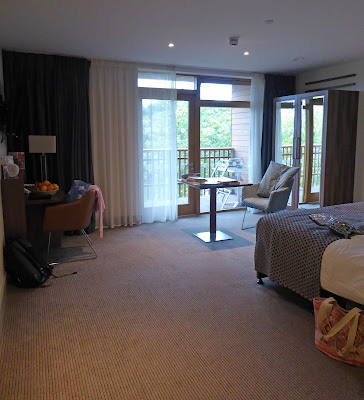 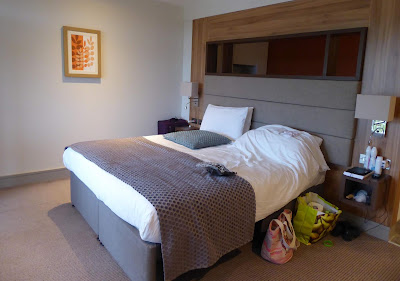 Today (and every day) my routine will be . . .
An early morning walk to the shop a long way round to pick up a paper and get anything I need for the day.  Today's biggie is toothpaste.  There's always something!
Then home for breakfast, to read the paper, prep lunch and to get sorted.
At ten the swimming dome opens and I'll there, metaphorically hammering on the door.  I usually stay there two plus hours, swimming, reading and people watching.
Then home for lunch before setting out on a much longer walk.  I might go outside the village a few times as there's plenty to do in this area but maybe I won't.  I'll see how I feel!
In the evening, I make and have dinner and then stay in and watch telly, read, compute or whatever.  I may eat out once this week but it's not top of my agenda - I can make meals I like just as much as the eating out meals and I enjoy the activity of cooking!

I won't be lonely.  There's almost always people to chat to and, anyway, I'm used to being solo, it's a non-issue.