Good morning, everyone.  It's a fine dry morning at the moment but will is stay like that?  Who knows!  Yesterday was a fine old mix of high wind, sunshine, lashing rain . . . no snow or hail though.  It felt cold in the wind but probably wasn't all that cold really.

As always, pottery was great.
The buttons were finished and I have now sewn them onto the patchwork bag where they look great, although I expected the glaze to come out a bit brighter.  You never can tell! 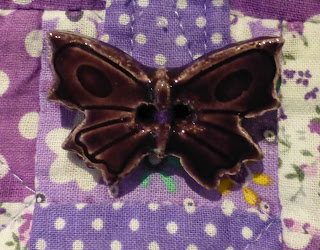 There's four, placed where the handles join the bag.

I didn't have much luck with the pendants I started last week.  One of them (a butterfly on a circle) came apart, although Alex says when I glaze them, the glaze will probably (!) stick them together, so I will give that a go and see.
The other snapped in half as I was 'buffing' it up - I'd rolled it too thin.  That wasn't savable!  Ah, well! 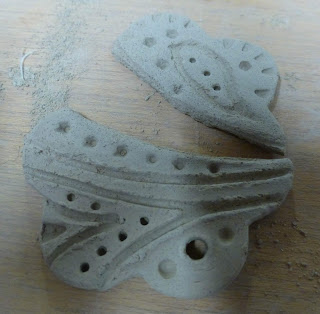 I started some more, making them a bit thicker so, hopefully, they will survive.  I forgot to take photos - silly me!

I've decided I want to make a set of coasters in leaf shapes so I started the first one, a maple leaf.  It's quite big because I'd also like to be able to use them on the table for my smallish serving dishes.  I learnt that to prevent the clay from curling up a bit as it dries, you gouge channels into the back and then sandwich it between two boards.  That was a new one for some of the others too.
Here's what I have done so far.  After it's dried, I will smooth it off (very carefully) and then it can have its first firing.  Now I have to decide whether to do the same shape in different glazes or different leaf shapes in the same glaze.  I'm just not sure. 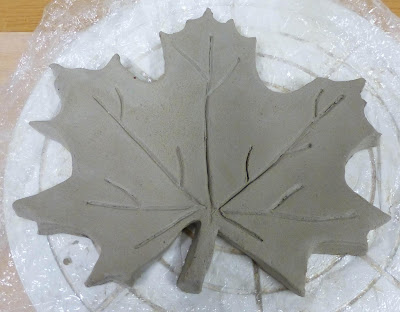 Next week is the last session of this term, but enough of us want to continue for extra weeks so I think the LEA has agreed.  We have to pay, of course, but we expected that.

We were talking about next term and I discovered that some were able to book well after I had been told on the web site that it was fully booked which I found distinctly annoying because we gel really well as a group!  I followed it up at the office and got apologies but, as it now is genuinely full with a waiting list, there's no chance to transfer across, especially as I have a place on Thursday evenings.
So I will do the Thursday evenings next term and make darn sure I book really early when the Autumn term courses are published so I get back into the Tuesday group.

Back home, I sorted some books - spaces are now appearing on the shelves - but forgot to do under that kitchen sink.  I've printed that poster out now and will attach it to the fridge door in the hopes that it will remind me.

Today is a very full day.  First of all I go swimming - I must as I missed Monday - and then there's a small window of time before a friend comes over.  After she goes, it is tuition and straight after tuition is is governors' meeting.  I have to fill in a form for that plus reading the paperwork, so I'll need to do that this morning.

Phew - at least there will be very little nibble time - I've had enough problems filling my meals in without extra nibbles!

Well, time to get ready for swimming so I'd better stop rambling.  Have a great day.
Posted by Joy at 07:26