Good morning, everyone!  It's a rotten morning, chucking it down with rain (good for ducks and plants) but at least that means that it isn't too chilly.

It's so dull that, to brighten things up, here's a photo I took just now (so the lighting isn't great).  My mini daffs are a real picture this year, so thickly flowering that picking some wouldn't created any gaps.
So I did. 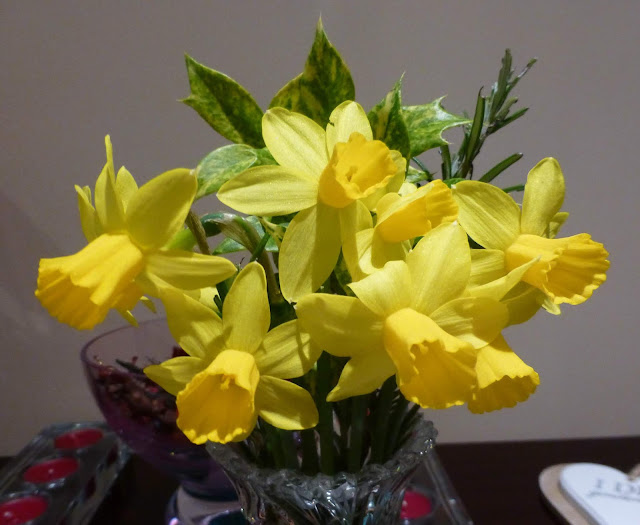 Yesterday, I set out earlier to go to my surgery in town to pick up my repeat prescription (for blood pressure and it seems to be working) before stopping off at Aldi's (near to where pottery is) for some bits and bobs, mostly fresh veg.

As always, pottery was great.
The butterfly buttons fired well so I brushed them off and chose a glaze called 'Royal Purple' which should go well with the bag they are intended for.  It took ages as on the pot it advised three coats and each coat had to dry on each side before applying the next coat.  I did take some photos but they have come out all blurry, sorry.

Then I decided to have a bit of a play.  I wanted to make some pendant thingies and someone else had brought some internet photos for me to use as a guide.  I had a play and started finding out what worked and what didn't work.  As I've said before, I'm no artist, so much of what I did never saw the light of day but I kept these and they are now drying in the cupboard for tidying up next week before firing. 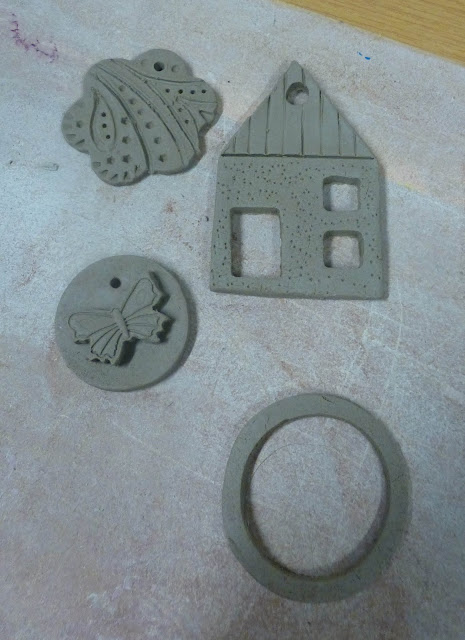 The oval circle was an accident.  I cut the circle (using an icing cutter, my hand's not that steady) but it was too big so I used a smaller cutter and decided to keep the resulting ring which turned into an oval as I picked it up.  I might cut out some tiny flowers and arrange them around the ring or - this has just come to me - a tiny little bunch of flowers as a sort of relief thing.
I need to do some homework this week and plan what I want to make in the pendant line as I like the 'free flow-ness' of the flower shape but it's a bit unfocused (if you know what I mean); a bit of design planning might make a big difference.
Anyway, as a first go, they are OK and, with a decent glaze, they should work.  Come Christmas, I should be able to make some original decorations for the Christmas tree too.  I wonder if you can get sparkly glaze.  I must ask.  You can buy and use your own glaze if you want.
The coil pot is finished and it's pretty horrible, even the glaze didn't turn out as I expected, but I made it so it is now sitting on my desk, looking at me with a decidedly Bart Simpson glare.  As a pencil pot, it will earn its space! 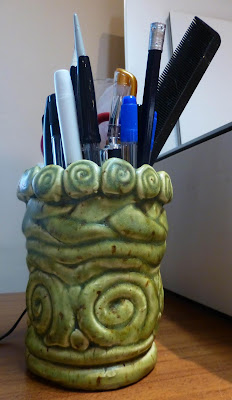 When I got home, I had a good rest as I was feeling a bit wobbly and got on with my knitting.  I've finished the back and have started the front.  This is the second jumper I am making with this yarn and I was filled with a sudden panic that I wouldn't have enough (you know how it goes when you don't use the set yarn) so at Aldi I looked to see if there was any more and, as luck would have it, there was just one more ball left although I had to rootle to find it.  So now I have plenty and probably won't need that last ball but I guess peace of mind is worth £4.95!

Come the evening, I managed to stay up to watch Sewing Bee but crashed out half way through and went to bed so missed the results.  I thought it was hard - who is going to make a swimming costume anyway?  I can see why they chose Juliet's as it was super and the fabric was gorgeous but thought it was hard on Janet who must have spent at least a third of her time generously helping everyone else and still managed to produce a fantastic result.
I shall catch up on iPlayer after finishing this!

Today I am still feeling decidedly dodgy from the upset tum, whatever caused it, so won't be going swimming.  Not a great start to my new resolution but I just don't think it will be sensible feeling like this.  So I will take it very easy today, probably catch up on sleep (it was a disturbed night) and get on with my knitting.  Oh, and do some pottery homework!

Have a great day, everyone, and stay dry