Good morning, everyone.  I've taken a peek outside and it's a bit chilly and a bit damp but nothing major.  Just an ordinary December morning really.  A few frosts might freshen things up a bit - it's so very dull, weather-wise, at the moment.

I was finding that I didn't always remember to take my meds first thing in the morning which resulted in forgetting them completely occasionally so I looked around and bought one of those tablet cases - the ones with separate boxes for days and times of the day.  It arrived at the beginning of the week and since then I've not forgotten so it might be an elderly thing to do but it's worked.
Here it is - colourful and eye catching which is why now I don't forget, even in my bleary-eyed-before-the-first-coffee-of-the-day state! 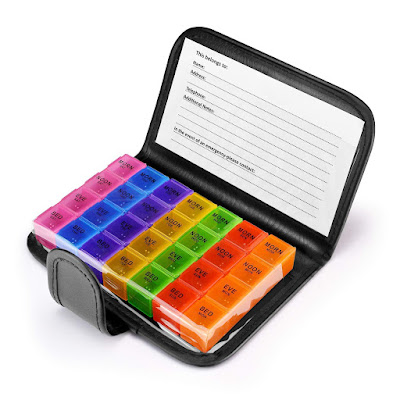 Yesterday was one of those days where I kept busy but didn't seem to get much done.  I went to Wyvale yesterday to get a Christmas tree for Mum and Dad - an artificial one, I mean.  Their tree is very old and not very nice and Dad said to get a better one if I was going to put it up for them so I did.  It's actually very nice as far as these things go.  While looking, I was sorely tempted by one for myself too, given that my own tree can't have much life left in it, but I didn't.  I might go back between Christmas and the New Year to see if they have any in the sale.

Slimming World group was good.  I've lost another two pounds which was something of a surprise AND I won the raffle too.  After so many weeks of losing one and a half pounds, two was great and very motivating.  I'm dropping down the BMI range and am looking forward to when I get into the normal banding which is more or less an undiscovered country.

It's Friday - no tuition today.  However, in the next couple of weeks I would like to go through the folders and deal with the piles of finished stuff therein.  I don't have to keep it or anything but prefer to shred it all for the sake of common sense so I might do one today.  Each one won't take long and there aren't many.

It's Friday - cleaner's day.  That means doing a general tidy up.  Again, it won't take long so that's good.  I shall move things around too, to make space for the Christmas tree.  It would be sensible to get this done and the tree assembled before she comes as it is very old and tends to shed rather badly.

Beth's round for lunch (cheese and onion toasties, yum yum) and then I'm off to school wearing my governor's hat for a meeting with senior management to go over the assessments for this term.  One that's done, my weekend starts with the school's Christmas Fair which I think I will go to as it will get me out of the way of Christmas nibbles.  I might find a few gifty things too which would be nice.
This time I will do the adult thing and be a paying customer rather than sneaking in behind my staff badge!

I was wondering what to do for the Advent offering today and remembered another tradition which has rather hit the deck last year because I wasn't feeling great what with gall bladder stuff.  I might this year because - because they are delicious.  They freeze well too which is what I will do.

So here they are!
Nigella's Christmas Muffins.

Method
Preheat the oven to 200°C/180°C Fan/gas mark 6/400ºF. Line a 12-bun muffin tin with muffin papers or (as I have here) silicone inserts.
Measure the flour, baking powder, bicarbonate of soda, caster sugar, cinnamon and nutmeg into a large bowl; grate the zest of the clementine/satsuma over, and combine. If you are doing this in advance, leave the zesting till Christmas morning.
Squeeze the juice of the clementines/satsumas into a measuring jug, and pour in the milk until it comes up to the 200ml mark / halfway between the ¾ cup and 1 cup marks.
Add the oil (or slightly cooled, melted butter) and egg, and lightly beat until just combined.
Pour this liquid mixture into the bowl of dried ingredients and stir until everything is more or less combined, remembering that a well-beaten mixture makes for heavy muffins: in other words a lumpy batter is a good thing here.
Fold in the cranberries, then spoon the batter into the muffin cases and sprinkle the demerara sugar on top. Bake in the oven for 20 minutes, by which time the air should be thick with the promise of good things and the good things themselves golden brown and ready to be eaten, either plain or broken up and smeared, as you go, with unsalted butter and marmalade.
Posted by Joy at 05:54