Most of yesterday was so baking hot that I stayed in and under cover.  During the afternoon the clouds rolled in but, to my dismay, no rain came.  Well, just a few drops that didn't even wet the ground.  I think it made up for that overnight and it's delightfully cool now although it's still quite dark and I am reminded again that the nights are lengthening noticeably.  It's bliss to feel cool and to have had a decent night's sleep too.

I managed to get one load of washing dry and would have managed two except that I was too lazy to get it out.  Well, not entirely lazy: over lunch I had a visit from an old friend who has been asked to lead a service in the crematorium for another friend, someone who occasionally came to our girls' dinners and who I have known for decades, on and off.  We had a good old chat about this mutual friend and I hope it helped in the preparation thereof.

THEN I was too lazy - and I did think it was going to rain.  That's my excuse anyway.

However, I did deal with that horrible thistle earlier in the morning.  The root went right through the pot and out the bottom into the pot underneath that pot. 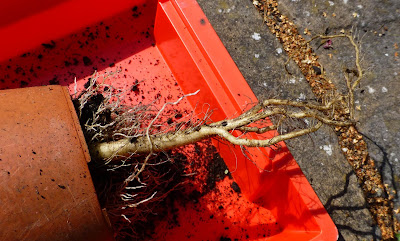 I didn't know thistle stems were hollow but this one certainly was! 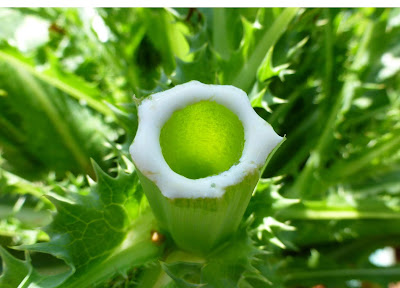 It's almost a 'what is this' type photo, isn't it?
It amazes me that the pot was so bone dry (as was the one underneath) that I had to soak the contents to deal with the bulbs but that perishing thistle was growing inches each day, green and lush.

I have one more tuition session this morning and then the day is my own.  At the moment I am dithering between going into town to look round the cathedral and going to the gym for a swim.  I think the latter will win out as I haven't been swimming for days and, after all, I have subscribed for the year.  The cathedral won't go away - I hope!

I won't need to go to the allotment today.  There will be some tomatoes to pick but they won't hurt for one more day and more rain is forecast so no need to water, I hope.