Good morning, everyone.  It's been a bit of a windy night round here, judging by the way my curtains were blowing in the night, but I gather from messages on Facebook that it's been pretty bad up in Scotland.  I hope there's not been too much damage of any kind.

Yesterday I set to with the iron, board and an overflowing basket.  Most of the stuff was very dry but, with a spray bottle, I managed.  I like those spray bottles.  They don't throw out nasty gunk from time to time and I like to add a few drops of scented oil - yesterday it was lavender - and it does make the ironed clothes smell so nice.  I shall be refilling the ironing basket today so I hope there's plenty of good viewing on the telly this evening.  It would be nice to look at an empty basket all week.

I made some lentil and butternut squash soup yesterday which was really rather tasty.  Weeks ago now, DD brought round two squashes, both not quite ripe, so they've both been sitting on the kitchen window ledge.  I used the smaller of the two yesterday.
First of all I cut the squash in half and scooped out the seeds.  I smeared the inside of the squash with butter and roasted it in the oven until soft.
While that was going on, I sliced a small onion, a carrot and a few stalks of celery (de-stringed) and softened them in butter.  Then I added half a glass of white wine, some water, some marigold low sodium vegetable bouillon, a couple of handfuls of red lentils and a good pinch of smoked paprika.  That all simmered away gently and when the squash was soft, I peeled off the skin which was lovely and soft and easily removed, adding the flesh to the simmering soup.  A quick zizz later, a bit of salt added and hey presto.  It's quite thick so I will slacken it a bit and top it with a good swirl of cream and that's the starter for Sunday dinner sorted.

As DD and DG come round for Sunday dinner at the moment (midday), I can indulge in a roast.  Today is it some leg of lamb which I intend to slow roast on a bad of red wine, carrot, onion, celery and potato with a sprig of rosemary.  The resulting sauce will make a fine gravy.  DD, being vegetarian, won't have any of that so I will make a separate gravy for her cauliflower cheese grill thingy.  Vegetables are roast potatoes, sprouts and broad beans so I think we will feast well. 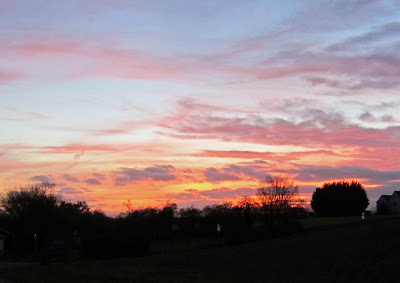