Morning, everyone.  It's bright and sunny this morning with wall to wall blue skies, unlike yesterday which ended up hazy with even a bit of rain over lunchtime and the afternoon - nothing bad but I was at circuits and had left my washing - two loads of it - out on the line.  Fortunately, it came to nothing much.

After a morning spent sorting out a few cupboards, etc, circuits was great.  It's been nearly a fortnight since the last session with Lindsey and I wondered how it would go but no problems.  In fact, one of the tasks was jogging round the garden, something I would not have been able to do last year after injuring my calves and ankles - and it was absolutely fine, no problems.  Maybe I ought to rethink building a bit of jogging up and down and round the garden into my day now.
OK, so I'm a bit still right now but it's a good feeling, not an ouchy one.

Then it was on to the penultimate tuition session which went really well.  We talked about next week and decided I would look for something 'different' - Twinkl has what they call 'mysteries' where the student has to solve tasks to work out who dunnit.  That should do the trick.

I also did some ironing while the clothes were still a bit damp which makes it loads easier but you have it all hanging around airing afterwards - swings and roundabouts!  I was really pleased with how well my new dress washed.  It's cotton and I wondered if it would crease badly but it didn't, it just needed a light iron.  Excellent.

I got a card through the letterbox from a friend that made me smile a lot. 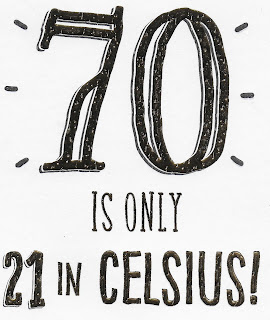 I'll go with that!
And another picture - the flowers from John and Gina have started opening out and are looking good although I need to rearrange them, I think.  It's on today's list! 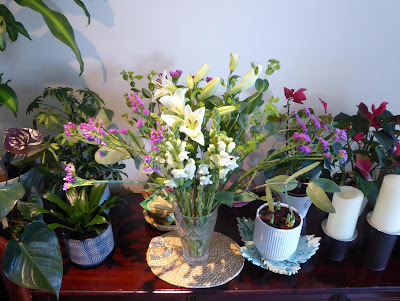 So that was yesterday.

Have a super day too.  Do you have any special plans?  xx