Good morning, everyone.   As the saying goes, 'early to bed and early to rise' and I've been awake since three which is annoying but there you go.  It's now just after five, too early to look out and check the weather but Beeb says it is going to be another beautiful day.  Excellent!

What a lovely day I had yesterday.  The weather was gorgeous - warm but not uncomfortably hot - an  I had the best time just wandering around.

I couldn't do a couple of things.  Moyse Hall Museum was closed and both St Mary's church and the Cathedral had Good Friday meditation type stuff going on.  I'm sure I could have looked around but it didn't feel right so I didn't.

As I walked through the gardens, I looked through one of the gates to the road and was gobsmacked to see hundreds of people walking along - until I remembered the day and realised it was the Good Friday march of witnesses or whatever they call it here.  It was nice to see so many people, all clutching reed crosses and enjoying each others' company.

The Abbey gardens and ruins were so good.  The tourist office/shop was closed for the day but I found info boards and managed to find somewhere giving out info leaflets too so I was able to make sense of the ruins.  I took loads of photos so here's a few . . . 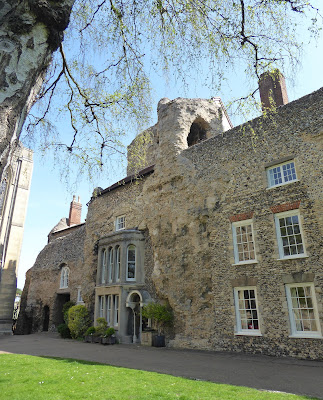 The west front, which had a central tower and octagonal towers each side.  I love that houses have been built into this feature so that they are an integral part of it. 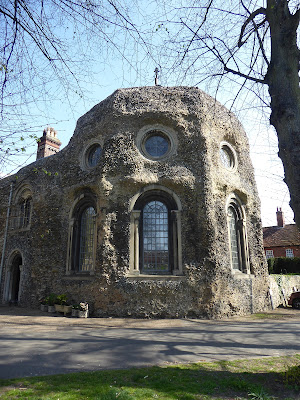 One of the octagonal towers, called Samson's Tower after Abbot Samson who built much of the Abbey Church (not personally, you understand!!)
Imagine living in a home like that.
His gravestone can be seen as one of a row of five abbots' resting places inside what was the Chapter House.  They were only discovered in 1903. 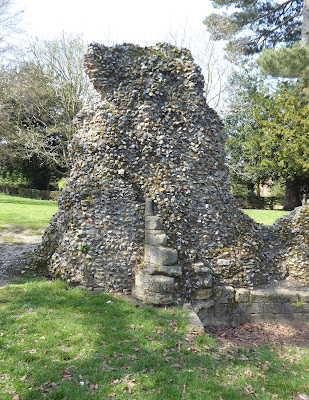 Just an example of the ruins which looks, to my uneducated eye like the start of a spiral staircase.  All the stonework from the Abbey was taken away after the Disillusionment in 1539 and what remains today is the rubble cores of the towers and walls. 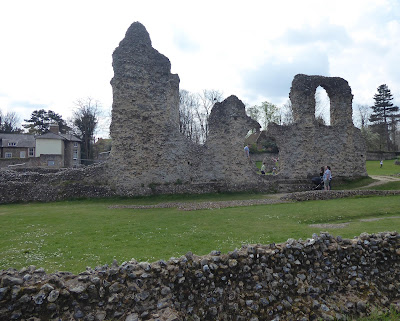 It took a while wandering around, in and out (very little is out of bounds) to get a feel for the layout and what it all means.  Although there were a lot of people around, it felt very peaceful and I was glad I could just walk, stop, ponder, etc, as I wished.
It was on this site that the barons met in 1214 and decided to do something about King John, who was 'not a good man, he had his little ways' (as AA Milne famously tells us)!  The following year he signed the Magna Carta.

After a very light lunch (Premier Inn breakfasts are very complete) of a diet coke and a bag of crisps in the Cathedral café, I hit the shops.  Yes, I bought that dress so now I have one nice, more dressy thing to wear at Five Lakes Potters at the beginning of June.  I got other bits and bobs too - a couple of pretty necklaces and some Neal's Yard hand cream and just enjoyed being part of a throng of very happy people enjoying the shops and the sunshine.  Despite things being closed/otherwise in use, there was plenty to do and when I got back I was glad to rest and relax in my room with a mug of coffee and my kindle.

Today, I'm off to West Stow Country Park, leaving quite early as the park opens at nine and the Anglo Saxon village opens at ten.  I'd like to be there before the crowds build up, if possible.
Then, when I get back, I will try the churches again.

I don't think I'm going to want to go home on Monday!