Morning, everyone.  It's much milder here this morning and wet too.  Oh, well, good for the garden, I am sure.
Yesterday passed pretty much as planned really.  I didn't do all that much really and it was jolly cold outside. 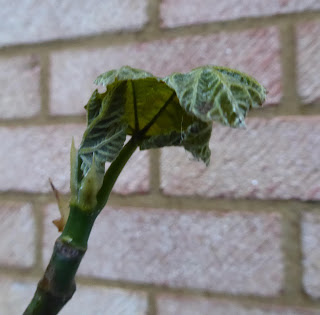 I was sad to see that the frosts have nipped at the new growth on my little fig, even though it's supposed to be pretty hardy and was by the house.  All the new little leaves are shrivelled and wrinkled and they were so fresh and strong the other day.  I just hope it will fight back and send up new growth to replace them.
I've just taken this photo and, to be fair, it looks a lot better than it did yesterday so fingers crossed!
Nothing else seems to have suffered all that much really!  (fingers crossed)
I had a short chat with Beth in the afternoon.  Not long because she started feeling a bit giddy and tired but it was nice to see her.  Generally, she's getting better but she is still positive and won't be back at work this week.  Alex remains negative, thank goodness.  Maybe he will escape this.
When I woke today, I felt the frisson of excitement I always get at the start of a school holiday.  It's six and a half years down the retirement track now and still I get that sense of excitement and freedom on the first day of a holiday.  It's such a nice feeling, I hope it never dies!
I start with tuition - in the holidays I see my student at eight thirty instead of after school.  It works for all of us and frees the rest of the day up for holiday jollification (for them) and the usual stuff (for me)!  Only four more sessions, I think, now - or is it five?  Not many anyway.
Then I plan to do a small shop.  There's not much I need, just a few bits and bobs including fresh stuff, so it shouldn't take too long or be too costly.
Later on there's the usual Monday circuits with Lindsey.  I'm looking forward to that very much.  After that, there's some ironing, just a little bit, and some other housework before I chill with my Kindle and get started on my next cross stitch.
Time to stop and get ready for the day ahead.  Do you have warmer weather and rain this morning?  Stay well and have a super day.  xx
Posted by Joy at 06:46